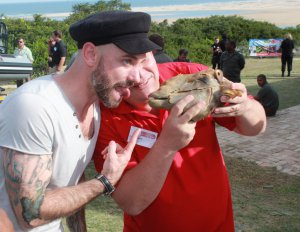 Wanted - 400 lovers of traditional sheep’s head (smiley) to tuck into a meal at the same time in order to set a world record at the annual Absa Kirkwood Wildsfees.
The festival hosted its first “Skaapkop Langtafel” in 2013 with 115 diners, and it was such a success that the organisers decided that the Sundays River Valley has what it takes to set a world record on Sunday, June 29, according to Absa Kirkwood Wildsfees director Jenni Honsbein.
“We found that the sheep’s head is a truly cross-cultural traditional delicacy, with men and women from all communities in the Valley sitting down at the same table to savour the heads, which were prepared and cooked specially for the Wildsfees,” says festival director Jenni Honsbein.
Sheep’s head – or “smiley” as it is known in South Africa – is a traditional delicacy from Norway and Finland to Scotland, the Mediterranean countries and across Africa.
This year’s table is being sponsored by the Red Meat Producers' Organisation (RMPO), die Burger and the ATKV.
“Last year we decided to host a sheep’s head banquet in order to promote traditional foods in the Eastern Cape.
“There is a whole ritual and tradition around the eating of the head – from the removal of the eyes to the slicing of the delicate tongue,” says Honsbein.
The annual Absa Kirkwood Wildsfees is being hosted from Friday, June 27 to Sunday, June 29.
More information and tickets for the Wildsfees and langtafel are available on www.wildsfees.co.za.