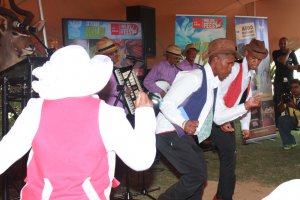 A line-up of award-winning artists and shows awaits visitors to the 13th annual Absa Kirkwood Wildsfees, which takes place from June 27 to June 29.

Themed “Celebrating becoming a teenager” in 2014, the Absa Kirkwood Wildsfees is certain to attract more than 50 thousand visitors, once again, to the Sundays River Valley, as it presents a jam-packed programme that offers something for everyone to enjoy.

In addition, the multi award-winning play “Oskar en die Pienk tannie”, with Sandra Prinsloo in the lead role, is being brought to the Eastern Cape by the Absa Kirkwood Wildsfees. Sandra Prinsloo was recently named by the Arts and Culture Trust, as the recipient of the 2013 ACT Lifetime Achievement Award for Theatre.  The play will be staged in the Kirkwood High School hall on Saturday, June 28.
And, for something a little “wilder,” the Wildsfees also features burlesque for the first time with the “Tipsy Gypsy” stage show.

The festival itself will be vying for a world record award – by having 400 foodies enjoying traditional “skaapkop” (sheeps’ heads) at the same table and at the same time.

“What a way to celebrate the festival’s thirteenth birthday – one of the top festivals in South Africa with more of South Africa’s award-winning acts and individuals on the grounds than ever before,” says Absa Kirkwood Wildsfees director Jenni Honsbein.

“Absa’s commitment to helping people achieve their ambitions in the right way is reflected through our continued partnership with this unique annual event. The Absa Kirkwood Wildsfees attracts significant numbers of visitors and is fast proving a catalyst for economic, business and tourism growth within the Sunday’s River Valley and surrounding areas,” says Tshiwela Mhlantla, Regional Executive, Absa Bank.
“Organisers maintain strict governance around the festival’s operations and finances, which is testimony to the passion, excellence and integrity inherent to this event and the people involved. These values are in keeping with Absa’s own, and we are proud to partner the festival once again in 2014” says Mhlantla.

Other interesting attractions include: getting close and personal with alpacas and angora goats – and their high-fashion products; reptiles and other creepy-crawlies in the Walk on the Wildside experience; bidding for prime buffalo from the Addo Elephant National Park, and the biggest car, agricultural, 4x4 and outdoor expos in one place at the same time in the Eastern Cape.

A new addition to the three day programme is the Algoa FM/Coca-Cola Songololo Stretch, which will host live entertainment through the day for children.

There are over 350 quality stalls to browse through, a wine show, beer tent (including the SA vs Scotland rugby test match on the big screen), cooking demonstrations and gourmet delights amongst others
There is a safe Kidz Zone designated for the young while the parents shop and enjoy the festival vibe.
The Absa Kirkwood Wildsfees 2014, a place to feel like a teen again - no matter your age - will kick off on Friday, June 27 and will end on Sunday, June 29 with a concert by Mango Groove.

To plan and book your Absa Kirkwood Wildsfees experience in 2014, please contact the Wildsfees office on 042 230 0064 or go to www.wildsfees.co.za for more information and programme line up