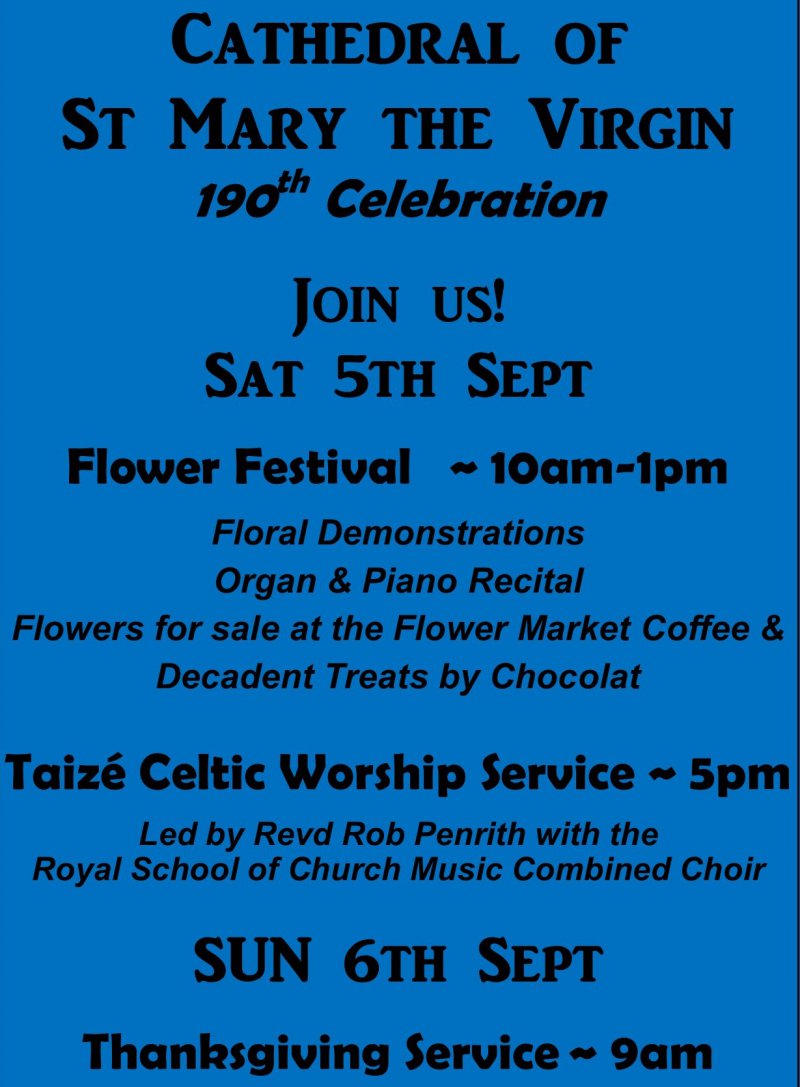 The Cathedral of St Mary the Virgin celebrates 190 years this year, 2015 and is the oldest church in Port Elizabeth. Until the arrival of settlers in the early 1820's, the needs of the British garrison at Port Elizabeth had been served by chaplains in passing ships. By 1824 a substantial settlement of 500 people had congregated in the town and the need for an established church was determined. The Church was founded at a meeting of citizens under the chairmanship of Captain Francis Evatt on 26 April 1824. The foundation stone of the Church building was laid on 5 October 1825, and in the same month, the Rev. Francis McClelland arrived to take up the post of Colonial Chaplain and minister of the church.

Until the church was finally opened for worship in 1832, the congregation met in a school room near the present St Augustine's Cathedral. The new Church was described as being not very imposing, oblong with a red tiled roof. External alterations and additions were made in 1860. The first organ was installed in 1867, by which time there was a well-established choir, which continues today.
In 1895 the building was gutted by fire. It was quickly rebuilt within a year with money collected from people as diverse as the Cape Prime Minister, Cecil Rhodes and President Paul Kruger of the Transvaal. It. The new church building, which was far grander in style, opened for worship on 6 September 1896.

Over the years St Mary's played a leading role in the formation of new parishes and mission churches with the Port Elizabeth community. The Cathedral continues to play an important role in the community with services on Sundays and during the week.
The church is open during the week for those seeking a place of quiet contemplation as well as tour groups. One of the main attractions for visitors are the magnificent stained glass windows, as well as the beautiful architecture, and the artistic memorial brass over the grave of Archdeacon A T Wirgman, who served as minister from 1875 to 1917. The brass is said to be unique in South Africa.

A number of activities are lined up for the 5th and 6th September to celebrate the 190th birthday of the Cathedral.
Our celebrations start with a Flower Festival from 10am – 1pm on Saturday 5th September following the theme of “Praise and Thanksgiving”. The public is welcome to come and view the arrangements on display as well as watch the flower demonstrations, listen to the organ and piano recitals all while enjoying a cup of coffee and decadent sweet treats. A flower market will also be set up for those wishing to purchase fresh cut flowers .

Everyone is invited to join us on Saturday evening at 17h00 with a Taizé Celtic Worship Service led by The Revd Rob Penrith in conjunction with the Royal Schools of Church Music Combined Choir. The Cathedral’s beauty, enhanced by the floral arrangements and candlelight, create the perfect atmosphere for a service designed for contemplation and introspection.

Our Service of Celebration on Sunday 6th September will be at 9h00. All parishes from the Anglican Diocese of Port Elizabeth will be sending representatives to join in this service of Praise and Thanksgiving, as we give thanks for all that God has done in the life of those at the Cathedral and the way that the Cathedral has served the community of Port Elizabeth over the last 190 years. .

Everyone is welcome to attend all the celebrations that are lined up for the weekend.