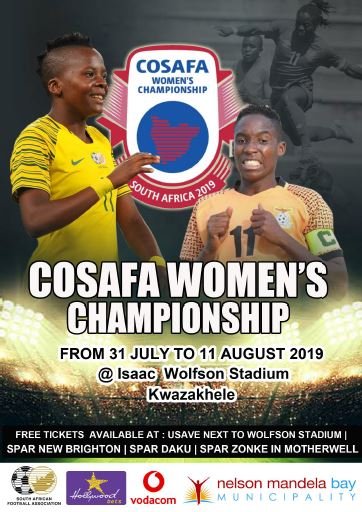 From 31 July to 11 August 2019 you will witness spectacular women's football at the Wolfson Stadium or, as alternative venue, at the Gelvandale Stadium.

No fewer than 12 teams will be competing for the coveted COSAFA Women's Championship trophy; aside from the South African competitors, participants will be from Angola, Botswana, Comoros Islands, Eswatini, Madagascar, Malawi, Mozambique, Namibia, Seychelles, Zimbabwe and Zambia. See the attachments for more information.

Women's football has had a huge surge in popularity in recent years. The many football fans from the Metro and the broader area that gave the players such fantastic support last year will flock to the games, mindful of the electrical atmosphere that prevailed last year and the dramatic fashion in which Banyana Banyana snatched glory.

Competition is expected to be tough, and the semi-finals on August 8 and the final on August 11 will be spectacular. Be there!