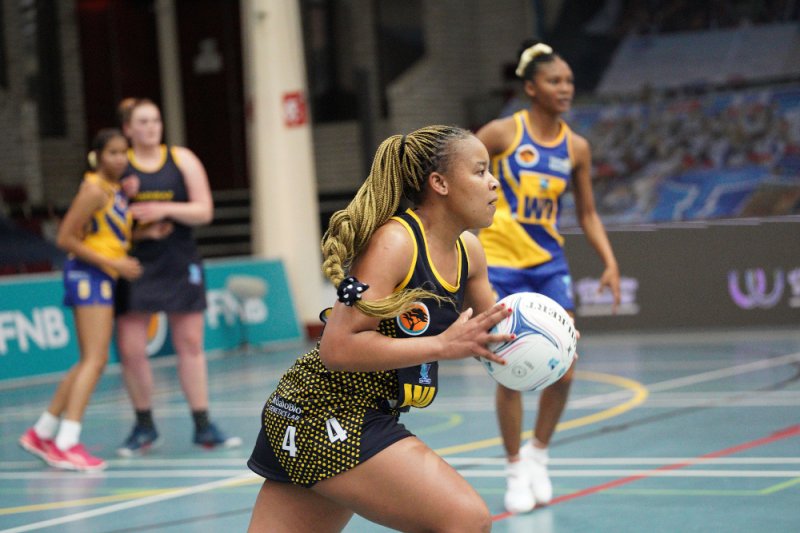 Siphosethu Kilani was one of five SPAR Madibaz netball players included in the University Sport SA team to compete in the CUCSA Games in Malawi next year following the recent tournament in Pretoria.

SPAR Madibaz netball coach Lana Krige believes they are on the right track after five players were chosen for the University Sport South Africa team to attend next year’s CUCSA Games in Malawi.

This comes after the Nelson Mandela University outfit finished sixth in the recent USSA tournament in Pretoria.

The players are Jeanie Steyn, Siphosethu Kilani, Mothira Mohammad, Noluthando Maliehe and Juanita van Tonder. In addition, Steyn was named the best goalkeeper in division A at the week.

Krige said it was exciting that these players had received recognition at a higher level.

“It’s a great reward for this group of players, which includes some seniors as well as some younger players,” she said.

“I believe it shows that Madibaz netball is on the right track, that we are doing things properly, and that our players are being recognised.”

The team mentor described the recent USSA tournament as the best-ever performance at the week during her time with Madibaz.

“We managed to beat the highly rated Pukke (North-West University) in our pool game and ended second in our section,” she said.

“That put us in the quarters against University of Johannesburg where we lost by just three goals.

“That victory over Pukke was an indication that we are starting to build a great culture of hard work, support and inclusivity.

“In general, we are not only closing the gap on the top sides, but also showing that we are capable of winning some of those games. I believe our future is bright.”

Krige did acknowledge, though, that they needed to continue to ensure that professional structures were in place to maintain this improvement.

“What I took from the USSA tournament is that our off-season programme really needs to be top quality. We must ensure that our players are competing at the highest level on a regular basis.

“If your level of training or preparation is not at that level, it will affect your play on the court when you come to the tough competitions such as Varsity Netball and the USSA week.

“So that is something we need to look at going forward, making sure our players are exposed to quality opposition.

“But I am optimistic about the future of the sport at Madibaz if we continue the culture of hard work and commitment shown this year.”