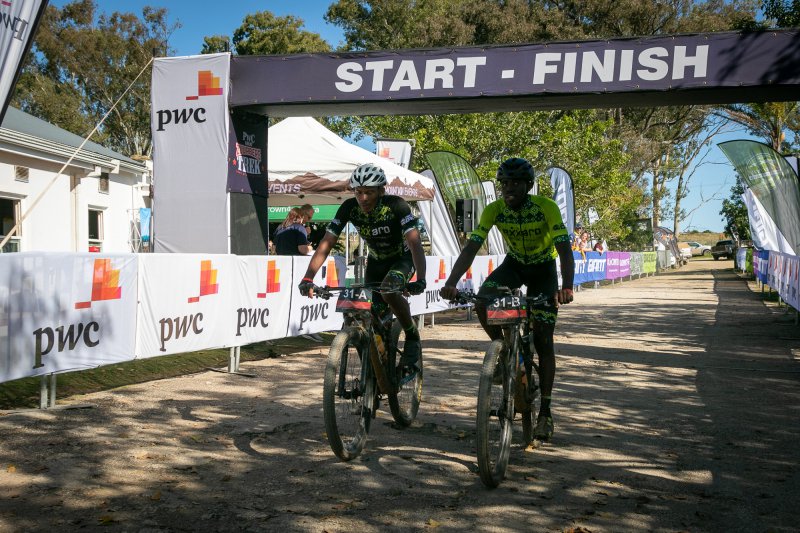 Exxaro MTB Academy riders Halalisani Ndebele, left, and Masixole Zondani cross the finish line at the Great Zuurberg Trek mountain bike race in Addo recently. The pair were invited to compete as part of the organisersâ objectives of developing the sport a

Organisers of the Great Zuurberg Trek have adopted a policy of paying it forward by using the iconic Eastern Cape mountain bike race to help broaden the development of the sport in South Africa.

The three-stage event, back on track after two years in the Covid wilderness, took place from the Zuurberg Mountain Village at Addo outside Gqeberha from May 27 to 29.

Although the boutique event also caters for less serious cyclists, Rossouw Bekker (Stellenbosch) and Matt Keyser (Strand) became the latest in a long string of professional teams to win the race.

But race owner Trevor Hayter said they were aware of the need to look at the bigger picture and added that in recent years, after consultation with event sponsors, they had donated entries to several development riders.

“We thought this was a great opportunity to give something back to the sport because part of our tagline has always been ‘Great Impact’,” he said.

“Now, in our most recent event last month, we had three teams from the development programme on the entry list and we want to look at going a step further where we will afford our facilities to development organisations on a complimentary basis.”

Such facilities include Hayterdale Trails, a network of purpose-built trails on his and neighbouring farms alongside the Zuurberg mountains in the Greater Addo area.

Hayterdale has hosted the national cross-country champs and is also the playground of other events in the Zuurberg Collection, including the Rubicon Great Zuurberg Trek E-edition, Zuurberg Weekender, Zuurberg Trail Run and Hayterdale Classic.

The development teams this year came from the Exxaro Mountain Bike Academy, which provides riders from disadvantaged communities the opportunity to compete in prestigious races such as the Cape Epic – and now the GZT.

Hayter said the invitation to the academy riders had been very successful and they had done well during the event.

“It was their first experience of the GZT and I think they loved the scenic riding and the exceptional convenience and comfort afforded as part of the race’s overall boutique experience,” he said.

“They also recognised the substantial positive impact we have on the immediate community and our willingness to accommodate development riders from all over the country.”

Hayter said their focus at the GZT has always gone beyond the racing aspect, with genuine efforts to give back to the local community at the top of their agenda.

“Our objectives include the upliftment of the community and to this end we have played a leading role in the development of a private school, the acquisition of two buses as well as many other projects focused around education and health,” he said.

“One bus is used to transport children to extra-curricular activities while the second, named Kids in Conservation, takes children to the Addo Elephant National Park where Sanparks rangers teach them about nature conservation.”

Hayter said they worked closely with the Sundays River Citrus Company Foundation and Engeli – both race partners – to raise capital as “one cannot have a material impact without finances”.