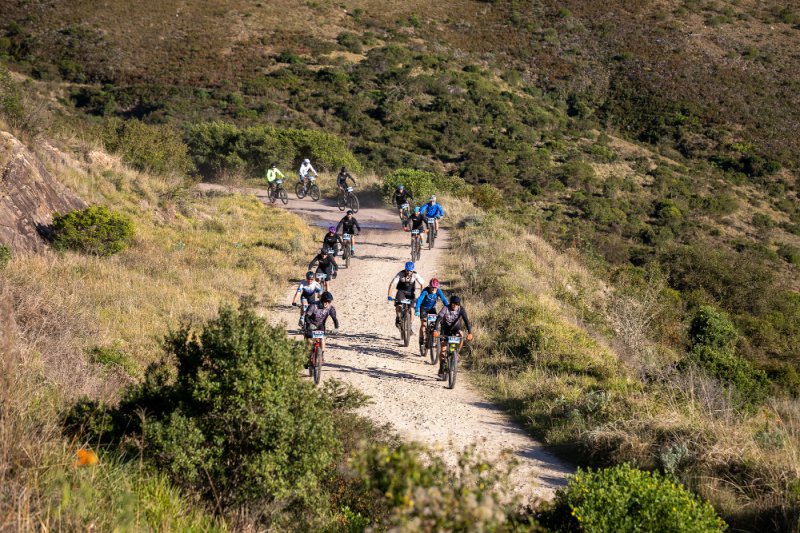 Over the weekend, the inaugural Rubicon Great Zuurberg Trek E-edition pushed tech and cycling boundaries when it became the first multiday mountain bike event dedicated to e-bikes to take place in South Africa.

The three-day ride in the Zuurberg mountains at Addo, outside Gqeberha, was a long time in the making after twice being postponed due to Covid.

It was inspired by the same team – brothers Trevor and Rob Hayter from Hayterdale Trails – who had engineered the Great Zuurberg Trek, an iconic stage race for acoustic mountain bikes at the same venue.

Participant Peter Ryder, who has ridden the traditional race twice, said an event for e-bikers had created a completely different dynamic.

“I believe this is the fastest growing sector in cycling and the experience I had this weekend says to me the GZT-E is here to stay.

“It’s an absolutely next-level experience of fun, camaraderie and everything these trails have to offer.”

The seasoned cyclist from Gqeberha started e-biking two years ago after being invited on an adventure ride.

“I still ride my normal bike, but this event has opened up so many new options,” according to the 53-year-old.

However, getting to the end without doing your bit is not a guarantee.

“You know that you have just so many watt hours available on your battery so you are continually doing the math to make sure you can finish with some power left,” said Ryder.

“I was doing all these calculations in my head while constantly playing with the power settings.

“On the flat, undulating stretches I would dial back to eco or trail mode and at the climbs I went back to turbo. Then, at the crest, I would dial it back again.

Capetonian Byron Griffiths, who rode alongside Gqeberha colleague Dev Joubert under the banner of title sponsor Rubicon, felt the GZT-E would take off.

“Being a purist for so long, I didn’t have many expectations for the event. But I found it really does change the way you can ride,” said the 41-year-old e-bike novice, who had put a Giant demo through its paces.

“It opens up the sport to so many people because you can bring a friend, who may not be as strong, or your spouse and still have a fantastic time.

“Not having to slog the uphills makes it so enjoyable. E-biking is going to be a big thing.”

The learning curve had been equally huge, he admitted.

“Battery management was key. On day one we learnt a lot about our batteries in terms of syncing the settings with your teammate’s.

“It brings a strategic element because the distances were so well set up that you couldn’t just put it on full taps and ride flat out. You had to conserve in certain areas and leave some for the climb at the end of each stage.”

Joubert, a software engineer, said his expectations were exceeded on and off the bike.

“The stages gave us an opportunity to experience different types of riding. From fast flats to flowing singletrack, long downhills and steep climbs, there was something for everyone,” he said.

“It was really a great occasion – from the routes to the hospitality.”

Gordon Pope, from Gqeberha, was among the participants who would not have been able to take part had it not been an e-bike ride.

With other health complications such as heart arrhythmia, screws in his legs from his motocross days and a bladder operation, he said e-bikes “has changed my life”.

“Despite all this I am now able to exercise, to get my heart rate up without being in the hurt locker, and I can ride twice the distance I normally would,” he added.

“This event would not have been possible and don’t think that you are cheating, because you are actually living life.

“For those who think that life is finished for people like us – we are having more fun now than ever before, so well done to Rubicon and the GZT-E.”

Also in the field was Imbuko-Giant professional Marco Joubert, who took advantage of the ruling that analogue bikes could be used to marry riders of different abilities.

“On the last day my partner Max Sullivan, riding an e-bike, and I decided to give it gas to see what my acoustic Anthem could do on a route which was mostly singletrack,” said the 25-year-old from Gqeberha.

“For most of the day we rode solo, but two riders caught us on the last climb up Zuurberg Pass, by which time I was taking big shots, so we just rolled through to the finish.”

He enjoyed testing himself against cyclists against whom he wouldn’t usually compete.

“That’s the magic of the e-bike because it provides the opportunity for you to keep up with riders who normally would be much faster than you.”

The Power Rig, which was developed for the GZT-E to charge e-bike batteries by way of sustainable energy, was another feature of the event.

“The charging station is similar to a wall socket in your home but everything is off grid,” explained Rubicon’s director of energy and e-mobility Greg Blandford.

“The solar panels provide DC power, which inverters convert into AC power to charge the batteries. So it is run on pure sunlight, which is pretty cool.”

As far as renewable energy was concerned, he said people were becoming more and more in control of their own power.

“We are starting to see battery technology move into lifestyle products like e-bikes which is why we, as Rubicon, decided to get involved in the sports scene and to sponsor this event.

“I think it’s been a great success; people are talking about the possibilities and we are really excited to be part of the whole exercise.”