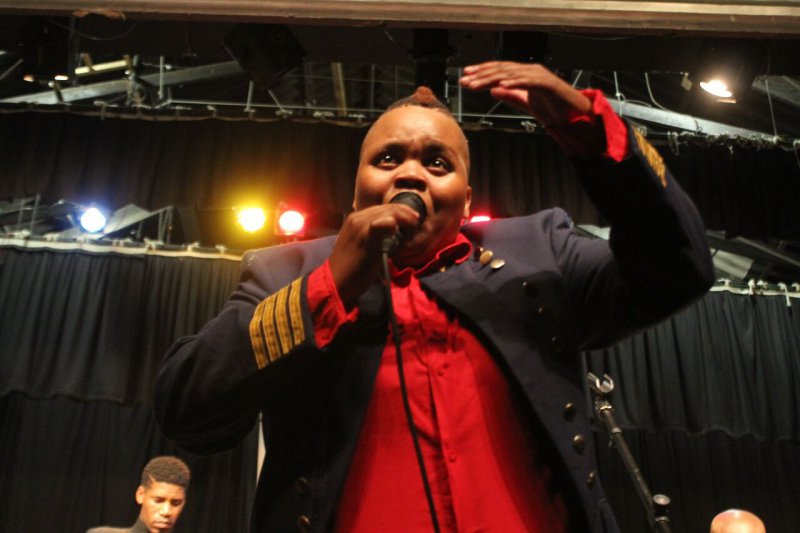 JazzâAfro Sundays at The Barn is commissioned music shows staged every Sunday. This programme is designed to enhance Nelson Mandela Bay based musical brands and provide jobs to musicians.

Singer-songwriter Asanda Mqiki is one of those versatile rising voices. Mqiki has spent the last few years carefully carving out a name for herself around the country. With a style of music that complements her love for jazz and R&B, Mqiki’s soulful voice reflects great maturity and has captivated audiences across the country and in stages in Sweden and Australia.

Born in Port Elizabeth, Mqiki’s earliest introduction to music was through her father. She recalls music being played all day in her home. At a very young age, she was exposed to the music of jazz heavyweights like John Coltrane. “Without realising, my father planted a seed to which now is now is growing and blossoming and I am grateful for that,” she remarks. She started working on compositions during primary school and has been performing since 2002.

Her first musical involvement came as part of the choir at Cowen High School, which instilled in her the rich roots of exploring the choral tradition that she carries into her music today. In 2006 she moved to Johannesburg to pursue studying contemporary music at the National School of Arts. Her time there helped shape her musical talents and provided a platform to performing as well as carving out skills which helped her voice and music direction. It was around this time that she decided to pursue music full time.

Around 2011, she became the lead vocalist in the band Take Note, which has played on some the country’s biggest stages and the renowned Standard Band Joy of Jazz Festival.

Asanda has since shared stages with the likes of artists such as The Soil, Sibongile Khumalo and Khaya Mahlangu. She has performed for consecutive years at the National Arts Festival in Grahamstown since 2014 whereby in 2014 her production ‘Jazz with Asanda Mqiki’ produced by the PE Opera House. Also in 2014 Asanda was part of the PE Opera House’s Music Concert Series featuring nationally acclaimed Eastern Cape born vocalists Pu2ma and Nomfundo Xaluva. It was in 2015 when Asanda was awarded the prestigious Standard Bank Gold Ovation award in 2015. Mqiki describes this as a huge milestone for her and a humbling experience, being the only musician that year that won Gold.

In 2014 and 2015 Asanda was invited to play at the Culture Music Club in Gothenburg, Sweden which she regards as one of her biggest career highlights.

She is currently working on her debut solo album, drawing inspiration from everyday situations and struggles around her. Elements of jazz, soul, hip-hop and kwaito fuse together in her sound. Musically she enjoys scatting as this allows her to explore improvisation fully. Thus far she already has garnered fans of her compositions such as the soulful lovesong “Squeeze Me” and the high energy afro-rhythms of “Take Six.”

Last year was another busy one for her and garnered considerable musical milestones. One such was being chosen as the featured African artist in March to perform at the inaugural LoveBusk Festival, a global busking festival hosted in Australia. The performance was done through an online livefeed and expanded her horizons in the way performances can be delivered.

Her Gold Ovation award formed connections that resulted in her performing at the Oppikoppi festival last August for the first time.  She relished the opportunity and describes it as a major career highlight for her, especially meeting other artists and being able to bounce energies between each other.

The award also linked her with the Cape Town Fringe festival and she collaborated with jazz singer Maya Spector for a performance there in October. The production, Vocal Explosion, turned out to be a huge success and in November opened at the Market Theatre in Johannesburg. After spending some time collaborating with different musicians and performing some of her favourite jazz renditions from Nina Simone to Letta Mbulu, Mqiki has now made it her focus to work on original material. She already has a few tracks underway that explore afro-soul and jazz roots. She draws great inspiration from vocalists like Sibongile Khumalo and Rachel Ferrell, whose work she looked to for help with understanding breathing techniques and who have both inspired her to be bolder on stage.

Asanda will be joined on the Jazz’Afro Sundays @ The Barn stage by her band comprising of Thoba Goba on Drums; Kamva Goba on Percussions; Grant Allison on Bass Guitar; Mtho Mabuza on 1st Keys; Que Qingana on 2nd Keys and Joash Soobramoney on Tenor Saxophone.