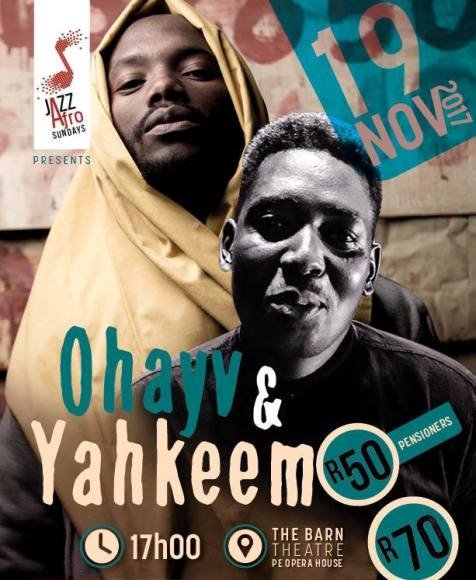 Jazz’Afro Sundays @ The Barn will be having a first of its kind Hip Hop Edition featuring two of the best Hip Hop acts from Nelson Mandela Bay Ohayv & Yahkeem this Sunday!

Ohayv is a soul singer, vocalist and rapper whose music blends Hip Hop, Traditional Folk Soul with a touch of Jazz. He is the founder of local Acoustic Soul band ‘Usiba Noncwadi’. He began his solo career in 2012 after Usiba Noncwadi parted ways. During the latter part of the year he put together a band comprising of a mixture of effects and instruments that give Ohayv his unique sound.

His ability to capture audiences from all walks of life with his powerful soul enricjing performances of his music which explores his versatility as an artist by blending genres and poetry into one offering. Ohayv has been invited to perform on big platforms such as Metro FM Awards 2016; Jazz At The Square; FIFA 2010 World Cup Fan Parks & SABC in house functions. During the course of his performing career he has opened for South African talents such as Don Laka; Judith Sephuma; Mafikizolo and the revered Vusi Mahlasela to name but a few. His popular singles; poems and song ‘Ingoma Yabasebenzi’ has received major airplay on Umhlobo Wenene FM during Worker’s  and Human Rights Days in 2014. Outside of being a performer Ohayv is the organizer of Thing We Do town sessions and The Turf Cypher these are the platforms Ohayv established for the development and growth of Arts in the immensely talented Nelson Mandela Bay.

Makhi Fibi is popularly known as Yahkeem The Mastabilda a multi - award winning rapper whose music resonates with all from townships, rural areas and beyond. Yahkeem’s musical journey began with the group ‘Khululekani’ which is the Eastern Cape’s most celebrated rap crew of all time! From 2003 the group had a number of hits which received airplay on national radio stations Umhlobo Wenene FM, Metro FM & Ukhozi FM. In 2007  released a self titled EP, however later disbanded with members pursuing solo careers.

His name Yahkeem means the one who builds which can be clearly seen, heard and experienced in his music; community mobilization and advocacy.

Join us along with Ohayv; Yahkeem and their incredible bands this Sunday for this special edition of Jazz’Afro Sundays @ The Barn.