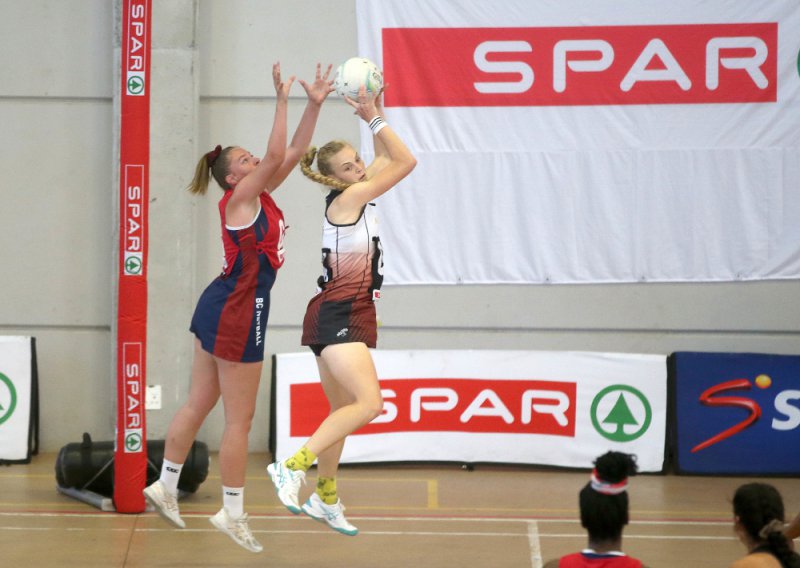 SPAR Madibaz star Jeanie Steyn protects the ball under a challenge from Zandre Smith of Buffalo City in the National Netball Championships in Cape Town last week. Steyn was named player of the tournament and included in the national squad at the eventâs c

Seven members of the SPAR Madibaz Netball Club have been selected for the SA senior and U21 squads following last week’s SPAR National Championships in Cape Town.

Four players – Jeanie Steyn, Siphosethu Kilani, Noluthando Maliehe and Juanita van Tonder – were included in the senior squad, while Van Tonder was joined by Kaylin Coetzer and Mihlali Mgweba in the U21 group.

Steyn, a goalkeeper, was named player of the tournament and Kilani the best centre court player.

This came after 14 Madibaz players competed for the Nelson Mandela Bay teams, with the senior side making the final before losing 66-54 to Cape Winelands.

Steyn was thrilled with her selection and the accolade she received as the tournament’s most valuable player after an injury enforced break that ruled her out of the Telkom National League this year.

While side-lined with a broken finger, she decided to work on areas of her game she had been struggling with.

“I wanted to be sure that when it came to a tournament such as this, I would be ready and the best that I could be.

“Getting into the national squad is a reward for the hard work, but it would not have been possible without the support of my team.

“Our defensive unit was very solid throughout and that obviously makes it easier for me.”

The experienced Madibaz player was also happy for her colleagues who were selected.

“I’m very proud of them because it is a boost for their self-confidence, and it is good for players from Nelson Mandela Bay to receive that recognition.

“It shows that there are real opportunities in the Eastern Cape for netball to grow.”

SPAR Madibaz netball manager Melinda Goosen, who managed the NMB senior team, said players around the country had experienced “a tough couple of years because of the pandemic”.

“It has been a case of constantly having to readjust your plans and to rethink the structure of your programmes from a high-performance perspective.

“But I must add that this has been an epic year for Madibaz netball.”

Goosen said she and Madibaz mentor Lana Krige, who had also coached the NMB senior team, always knew that there was special talent in the Madibaz squad.

“It was all about trying to find that right balance and the right structure with the high-performance programme in terms of the pandemic restrictions.”

She admitted that it had been a challenging assignment.

“We really just persevered and that helped us to come through a tough Varsity Netball competition and a testing USSA tournament.

“We knew these players had the skills to meet the demands we placed on them. It was just about them putting their faith in our systems.

“That makes us super proud of all the girls from Madibaz who made the national squads.”

Goosen said that, from a Madibaz point of view, the players never gave up and showed resilience in sticking to the programme and believing in the coach’s strategy.

“This (the national selection) is the reward for the hard work they have put in during a tough period. I could not be any prouder.”

To have so many players recognised at the highest level was a massive feather in their cap, she said.

“It shows we are on the right track, and I feel there is so much more to come that all I can say is ‘just watch this space’.”