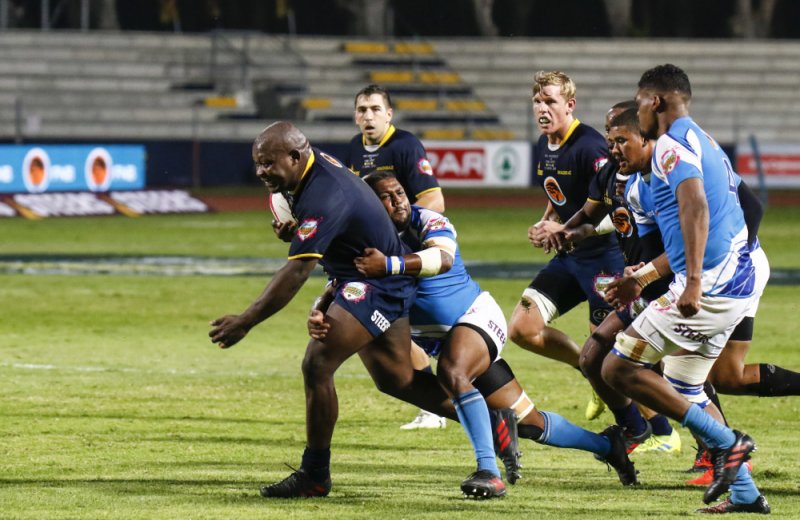 FNB Madibaz prop Tembelihle Yase goes on a run during a Varsity Shield rugby match this year. The Nelson Mandela University marketing graduate has withstood several challenges to succeed at academics and on the sports field during his varsity career.

Humble Madibaz rugby prop Tembelihle Yase has demonstrated how hard work and a strong support base helped him achieve his aims after a period of great uncertainty when his varsity funding dried up.

The 25-year-old Nelson Mandela University graduate, who is doing his master’s in marketing, feared his varsity career was on the skids when a contract with Eastern Province Rugby was terminated in 2015.

This left him with no funds to see out the year which, he said, led to a period of tremendous self-doubt about his rugby-playing abilities.

“Fortunately, my mother and friends came together and gave me massive support, both emotionally and financially,” he said.

“It was a really challenging period for me, but fortunately I was awarded NSFAS [National Student Financial Aid Scheme] funding in 2016. But that was a seriously tough time in my life, which I was able to overcome through the backing of my family and friends.”

Not surprisingly, he said ubuntu, a South African term that means showing humanity to others, was an important lesson he had learnt.

“In addition, hard work and staying true to yourself are two of the other biggest lessons for me at varsity,” said Yase, who matriculated from Cambridge High in East London in 2013.

After doing some research at high school, the prop said his personality and the marks he achieved in matric suggested he study marketing at a tertiary level.

His academic efforts saw him graduate with a marketing diploma in 2016, a BTech in marketing in 2017 and a BCom in finance and marketing in 2019. This led to his master’s course, which he began last year.

Besides the support he received on a personal front, Yase acknowledged the high level of mentoring provided at Nelson Mandela University, both in the lecture room and on the sports field.

“There has been an abundance of support from the entire department of marketing at Nelson Mandela University,” he said. In particular he praised senior marketing lecturer Mrs Tania Shrosbree for her support “both in and beyond the classroom”.

“Equally, Madibaz rugby has had my back throughout my career, ensuring I had all the support I needed each and every year. For this, I will always be grateful.”

Yase was an important player for the first team this year as they topped the combined log from the 2019 and 2020 Varsity Shield seasons to gain promotion to the top-flight Varsity Cup next year.

He insists he is no superstar, just someone who has worked hard to manage the demands of completing his academic commitments and fulfilling his dreams on the rugby field.

“The key to my balance in academics and sports is humility,” explained the prop.

“I understand that anything you love can be taken away from you suddenly, just like that. So I always apply myself to give my absolute best effort academically and in rugby.

“Similar to all the players in the squad, my role at Madibaz rugby has been to prove myself academically and to be ruthless and determined on the field until the final whistle.”

He identifies several past Madibaz stars as his biggest role models.

“Coming to play for Madibaz, players like Andile Jho, Yamkela Ngam and Robert Izaks were great examples to young players and I learnt from them how to conduct myself on and off the field.

“They showed fantastic attitudes against the fiercest opposition, but are also graduates in their different academic disciplines. That is what I am striving for.”

Yase emphasised the need to be humble in all spheres of life.

His message to a first-year would be: “Don’t forget to greet and say hi to the woman or man you may find yourself sitting next to in class. It is a sign of good manners and, most importantly, it shows humility.”