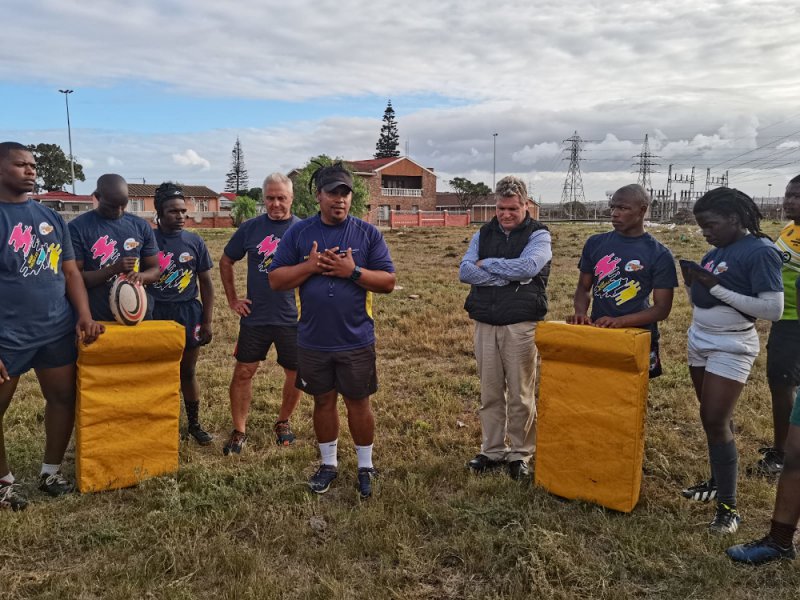 Madibaz head rugby coach David Manuel gives some tips to the Ithembelihle players during a training session as part of the Madibaz Rugby Clubâs outreach programme.

The Madibaz Rugby Club has passed the ball forward by linking up with Ithembelihle Comprehensive School in an outreach programme designed to nurture and retain local talent in the Eastern Province.

Madibaz Sport rugby manager Mthunzi Hewu explained that the club’s vision was to commit to a “community interaction project” that would develop rugby while encouraging healthy lifestyles.

“So far it’s only been with Ithembelihle, but we have had talks about a combined schools development programme run through Bombers (RFC) in Zwide,” he said.

“We would love to reach out to other schools and clubs but a lot will depend on what funding we can get.”

Hewu said the rationale was to leverage the club’s legacy to encourage student-athletes, coaches and support staff to live the ideals of excellence, ubuntu, integrity and equality.

The club wants to expose learners from Ithembelihle and other targeted Nelson Mandela Bay high school teams to the Madibaz High-Performance Complex on the South Campus to give them insight into the services offered.

“The two-hour session is where scholars actively partake in a brief ‘day in the life’ of a Madibaz student-athlete,” explained Hewu.

According to him, they will be shown around the centre and witness a visual skills training session and recovery ice bath. There will also be a presentation by a member of the Madibaz Rugby high-performance team.

The Student Recruitment Office, in conjunction with Madibaz Sport, will then share information related to entrance requirements and courses at Nelson Mandela University.

Hewu described the session with Ithembelihle as a major success.

It included the sharing of experiential knowledge between Madibaz, local schools and community youth teams, he said.

In addition, African Bombers assistant coach Andile Makomfane was reportedly excited that Madibaz had reached out to his club-driven schools development initiative.

“The project is not just about boosting the Madibaz Rugby Club,” said Hewu. “We want to expose learners to the high-performance rugby environment at the university so that they have a chance to possibly pursue their dreams in the sport.”