Madibaz take positives from 'best student rugby' in the world 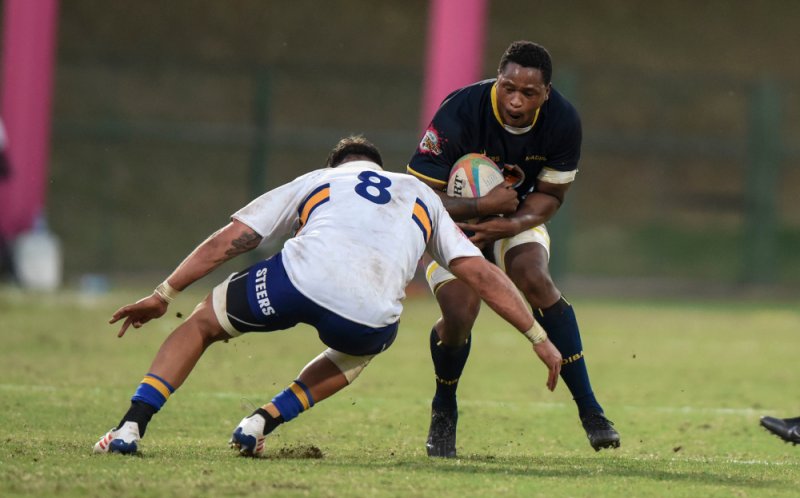 FNB Madibaz loose forward Mihlali Mosi, being tackled here in a Varsity Cup match, has earned a short-term contract with the Cheetahs after some impressive performances in the tournament this year.

The Nelson Mandela University rugby club will continue to invest in their student-athletes after completing a tough return to the FNB Varsity Cup competition on Sunday.

This is the message from Madibaz Sport rugby manager Mthunzi Hewu and coach André Tredoux, who acknowledged that it had not been easy competing at the elite level.

“We realised we faced a difficult task but we did everything in our power to prepare for the 2021 season,” said Hewu.

“Unfortunately, some things didn’t go our way, from late preparations due to Covid-19 regulations and sustaining a lot of injuries during the competition that forced us to field a 22-man team in our last match against UCT.”

However, said Hewu, the FNB Madibaz Rugby Club pride themselves on the service they offered student-athletes.

“The attitude is that they are students first and sport stars second, hence we ensure that they have an excellent university experience. This programme helps to create well-balanced individuals and everyone at Madibaz Rugby plays an important role.

“My core message to the players is that we are a team and the success of one student-athlete, one team or one coach contributes to the overall success of the club. Together we are stronger.”

The Varsity Cup provides a chance for players to showcase their talents and Hewu felt Madibaz were on the right track, especially after Mihlali Mosi (Cheetahs) and Luyolo Dapula (Griquas) signed professional contracts.

“The club’s responsibility is to identify talent and to implement programmes to maximise that potential. Therefore, the success of a player is testimony that our systems are progressing well and the contracts for Mihlali and Luyolo contribute to the overall success of Madibaz Rugby.”

Tredoux was pleased with the spirit shown by a young squad throughout the tournament, while admitting some harsh lessons had been learnt.

“After a year of not playing it was positive to get back onto the field and we would like to thank Varsity Cup for the opportunity. We were in the deep end, but we are proud of the resolve shown by our team.

“Also, we are pleased to have two players sign professional contracts because it shows that our varsity offers a solid platform to get your studies done and potential to become professional players.”

Tredoux added that they had to come to terms with the sharp edge of competition in what he called “the best student rugby tournament in the world”.

“There is no mercy in rugby at this level and we have some hard work ahead of us to be more competitive.

“Rugby is a team game and we showed periods of developing into a good side, while there was consistently outstanding play from players such as Luyolo Dapula, Mihlali Mosi, Arnouw Nel and Tiaan Schutte.”

He said the planning for next year’s competition was already in place.

“We are currently busy with a thorough review of the tournament and after studying all the relevant data we will make precise plans going forward.

“We are excited about quite a few young players who have received exposure at Varsity Cup level.

“I would also like to thank my management for their continued hard work and professionalism. Even though the results didn’t show it, it was a pleasure to work with them all.”

Meanwhile, Mosi, who is a loose forward, said he wanted “to make a difference in the Cheetahs jersey”.

The 25-year-old signed a short-term contract with the Bloemfontein-based union and is set to make his provincial debut in the Currie Cup Premier Division.

“Simply put, I want to do enough to extend my contract [which runs until the end of October],” said Mosi.

“Playing professional rugby is a dream I’ve held onto since I was a boy. Like my studies, I intend to serve with distinction and make a difference in the famous orange jersey.”