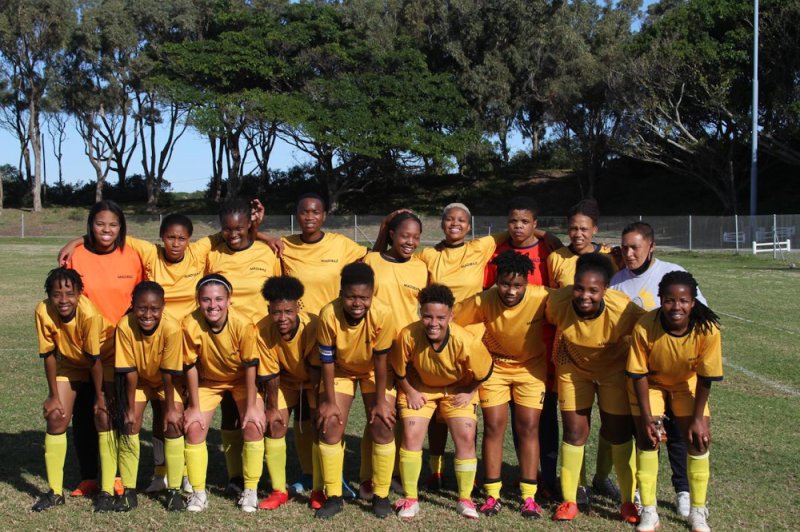 The Madibaz football team have put themselves in line for promotion to the Sasol Women’s League after winning the Safa-NMB regional title last weekend.

Under coach Niesie Daniels, the Nelson Mandela University outfit survived some anxious moments during the season before emerging triumphant.

They will now contest the promotion playoffs for the Sasol competition, with the dates still to be confirmed.

In her first season as the team’s mentor, Daniels said they were extremely proud of their efforts during the season.

“It’s a feeling of joy and passion as I know how much they wanted to win promotion to the Sasol Women’s League,” she said.

“There were often mixed emotions during the journey, especially when we dropped from first to second on the log and I could see that they started feeling despondent.

“But I kept trying to inspire them to remain positive and just to follow the process.

“The key for us was the effort put in by the team, although I also brought in some experienced players and they complemented each other well on the field.

“Mentally and physically it was particularly challenging, but great teamwork and staying focused and confident helped us to become the champions.”

Besides their objectives on the field, Daniels said they placed an emphasis on developing the players across the board.

“Naturally we want them to improve as players, but we also want to educate them in social skills to see them grow as individuals.

“I am grateful for this opportunity and knowing how much the players wanted to win the league, this is a highlight and our first goal accomplished,” she said.

“My main objective is to create the structure and momentum to be able to achieve long-term goals and also to meet the goals set for me by my fellow workers.

“As a coach I have knowledge about football, but it’s not just about understanding fundamentals. It’s also about having a desire to keep learning, so I will still reach out to my mentors to continue the growth process.”

Madibaz Sport football manager Mark Tommy said it was another landmark for the varsity as they strove to grow a culture of excellence in the sport.

“There have been many challenges through lockdown measures and a positive result is good for the psyche of the student-athletes,” he said.

“This sense of achievement helps the individuals as well as the sporting culture at Nelson Mandela University.”

He added that their processes went further than just “looking at the scoreboard”.

“Madibaz Football puts great emphasis on creating systems and structures that keep everyone involved and accountable, from student-athletes to the technical staff.”

He said the coach was supported by technical performance manager Lisa Benjamin and fitness and conditioning coach Ayabulela Ndyebi to ensure the process led towards the desired outcomes.

“Typically, the Madibaz Football programme is driven to ensure that the student-athlete is developed holistically and supported through the technical and academic demands by effective time management strategies.”

Tommy said they were also focused on the future of women’s football.

“As part of the recruitment and talent identification strategy, a Madibaz team have been invited to compete in the Engen Knockout Challenge in the U20 division in Johannesburg during the first week of October.

“The women’s team are also preparing for the USSA tournament in mid-December to try to qualify for Varsity Football in 2022.”