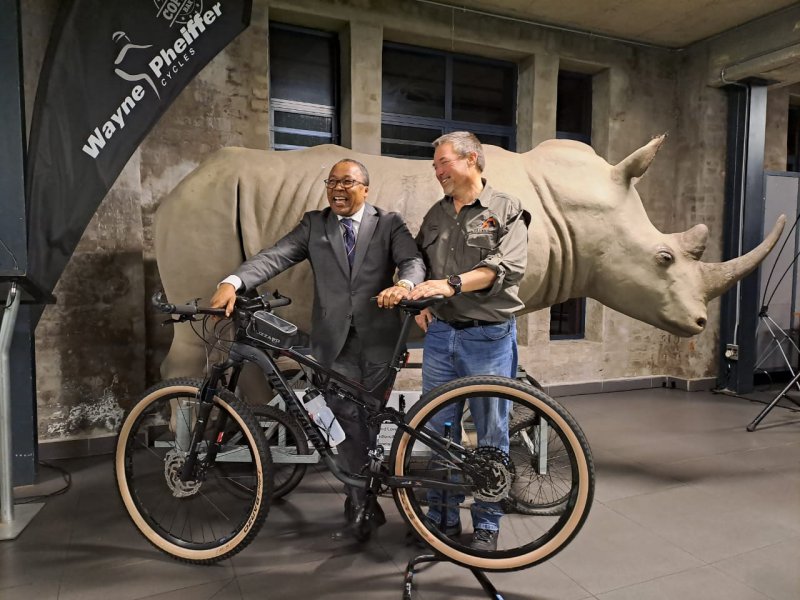 One Land Love It NPC (OLLI), a non-profit focused on rhino conservation, was born out of two cycling expeditions in 2015/2016 and 2017 where Wayne Bolton cycled a total of 8000kms around South Africa by mountain bike. These expeditions were initiated to create awareness around the rhino crisis and the challenge that rangers face having to shift from conservationist to soldier. By example Wayne demonstrated how ordinary people can move from caring about the rhino conservation crisis, to doing something about it.

In 2021, SA recorded an increase in rhino poaching for the first time in 6 years.  Alarming statistics show a significant decrease in population in the Kruger National Park – the bastion of our rhinos.  This suggests that a depleted population (59% decline since 2013) could account for the disturbing increase in poaching as more provinces and private reserves are being targeted. 2021 ended on a shocking note as 23 rhinos were poached in 36 hours across 4 provinces. In KZN alone more than 100 rhinos have been poached in the first 5 months of 2022, most in the 1 reserve attributed with helping to save the species over the last 100 years.

Tourism and conservation are inextricably intertwined and Covid has affected both dramatically.  The consistently ruthless poaching of our rhino in the last decade along with other issues such as periods of extended drought have affected our rhino populations significantly to the point that recovery is challenging.  Loss of tourism has put our reserves under immense economic pressure with many private parks lacking the resources to divert to protection of their rhino especially in the face of escalated targeting by criminal syndicates who are throwing their nets further afield and zoning in on reserves that are vulnerable or compromised.

Namibia has also not been unscathed.  So far this year they have recorded the loss of 22 rhino with 11 black rhino carcasses discovered in less than 2 weeks in June alone in Etosha National Park.

Namibia holds the largest population of the critically endangered black rhino and South Africa most of the near threatened white rhino.Together they are the primary custodians of the planet’s remaining rhinos.

Given the current concerns and in line with previous expeditions, Wayne will embark on the Forever Rhino Ride Expedition 2022 where he will link Namibia and South Africa.  He will cycle by mountain bike from Swakopmund on the west coast (Atlantic Ocean) of Namibia commencing on the 20 August, and finish in Nelson Mandela Bay (Indian Ocean) in the Eastern Cape of South Africa on the 22 September, a ride of approximately 2 400 kms.

The expedition will generate awareness of the need for ordinary people, across countries and cultures, to conserve our ancient rhino species. Rhino may have been with us forever, but we can no longer take that for granted.

Accordingly, a symbolic link will be made between the ancient Namib Desert in Namibia and the Karoo area in the Eastern Cape of South Africa.

On World Rhino Day, 22 September, Wayne Bolton will be joined by a group of cyclists at Schoenmakerskop who will accompany him to his finish at the iconic Donkin Reserve. He will carry with him half of the Forever Rhino Pledge which will have been handed to him in Namibia by representatives of the Ministry of Environment, Forestry and Tourism.  Under the unfurling of the South African flag, in keeping with Heritage Month, the 2 halves of the pledge will be connected by representatives of South African parks including SANParks, ECPTA and private parks represented by Shamwari Game Reserve.

Baton of Hope and the OLLIMove

In Namibia Wayne Bolton will also receive the Baton of Hope from Save the Rhino Trust.  Carved out of wood in the shape of a rhino horn, the baton is in four parts.  At the Donkin Reserve this will be disassembled, and each part will be handed over to OLLI representatives who are local legends in Nelson Mandela Bay.

This will form part of One Land Love It’s annual international virtual event - the OLLIMove - which runs for a week starting on World Rhino Day. Anyone can participate. Wayne Bolton (cycling) and Jenni Gault (hiking to Everest Base Camp) will have completed their “moves” and will pass the baton pieces to OLLI representatives who will each proceed to embark on their own OLLIMove.  Sharon Jessop (running from NMB to Komatipoort), Melikhaya Frans (running) and Andrew Stewart (swimming around Cape Recife).  They are well known as exceptional individuals, role models who demonstrate the tenacity and heart of the Eastern Cape.

As they take the baton from a local family who has brought it home to the Eastern Cape and is sending it back out, they “move” together in the spirit of #JointCustody and the fight to save our rhino which represents our natural heritage - the lifeblood of tourism and conservation.  Being reduced to “The Big Four” is inconceivable!

When the Forever Rhino Ride was launched in Nelson Mandela Bay this week, MMC of Economic Development Tourism and Agriculture, Khusta Jack spoke from the heart saying: "Inspiration comes from people and it is important for us to attend events like this. It is important to surround ourselves with people who are good. Good heart, deeds, and purpose inspire people to be better. And this is your heritage. It can be our heritage, and our message to the world. Thank you for your support of our metro and our people. Support will follow you, too. Your strength will infuse other good people with strength. How far can we go in doing good?

It was poverty that made me appreciate our wildlife. It is our national treasure.

Boltons...persist, you're doing a good job. If we drop one species, we drop them all. We must move now from caring to doing.

We all do things in our own way. We contribute through our strengths."

On completion of the Forever Rhino, Wayne will have cumulatively cycled a total of 10 400kms for rhino over 3 expeditions, averaging approximately 100 kms a day. A family demonstrating that ordinary people can make a difference for an iconic species before it’s too late.

As Wayne Bolton said at the launch of this ride:  “Rhino have been here forever but will they be here forever? What we do today can change our forever… extinction cannot be our legacy!”

One Land Love It NPC uses funds raised through donations to further the fight against wildlife crime.  To donate or find out more, visit www.move.oneland.co.za

One Land Love It:  www.oneland.co.za

Author: Nikki Bolton (One Land Love It)
Back to news articles