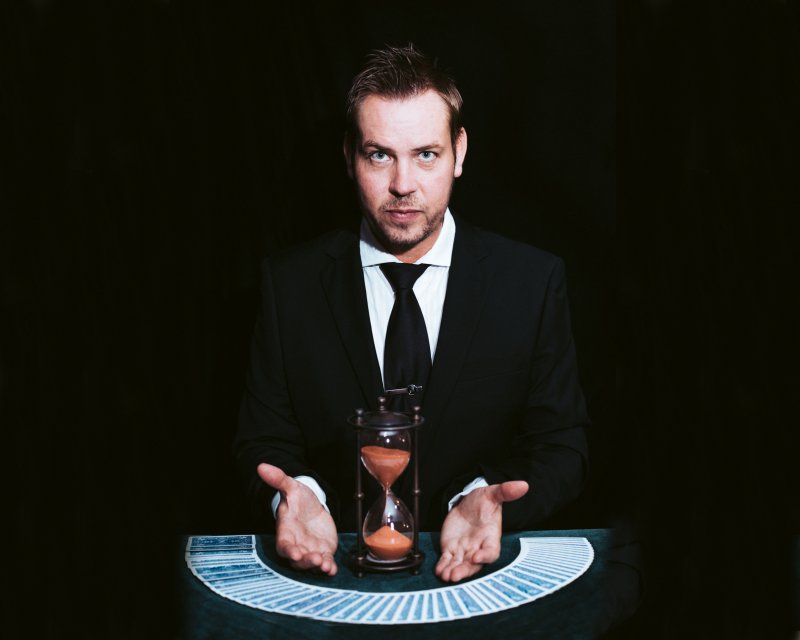 Roy Swann in The Conjuror

In the wake of David Blaine, Derren Brown & other close-up performers, it’s rare to find sleight-of-hand artistes these days who perform magical feats across a broad spectrum, but that’s precisely what Roy Swann does, and has been doing for years around the country.

Initially mentored by SA’s David Copperfield, Mark Rose-Christie, who launched magic on a grand scale for the first time at the National Arts Festival in the late 1990s, and then further mentored by the one-time president of the East Cape Magic Circle, the late John Dunn, who was arguably SA’s most deft sleight-of-hand master, Roy became the consummate performer that he is today, after learning further from the overseas magic champions over time, and then adding his own clever tweaks & thrilling touches.

The phantasmagorical result is that this year it’s not just playing cards, nor is it just mind-reading, but a wider array of magical feats, plus a journey through time - simultaneously. One feat dates right back one of magic’s oldest recorded effects - the ‘cups & balls’ – depicted in an inscription on a tomb wall in ancient Egypt nearly 6,000 years ago. But, performed in a most unusual manner by Swann which even baffles magicians.

Amidst Swann’s array of ruses & subterfuges, also come several feats presented in the modern idiom. “I know magic well, but I was utterly dumbfounded by Roy’s performances involving a visible transposition of coins from a metal cup to Roy’s hands & back again, let alone all his other feats of prestidigitation, but this is hardly surprising given that his magic has always been of international standard”, said Rose-Christie, after assisting Swann during rehearsals.

One of the other impossibilities is a highly visual penetration effect involving a solid metal ring & equally solid rope, which actually looks as if they really ‘melt’ through each other. Impossible? ‘Mind-blowing’ is often a phrase utilised for magicians of Roy’s calibre & stature, however his legerdemain borders on the almost miraculous.

With so much that will be new for lovers of magic this fest, Roy Swann’s shows are not to be missed. Due to other previous commitments, his shows will only run for four (4) performances, during the last half of the fest, at the Masonic Lodge. They’re already half-sold out, so don’t delay booking via the NAF booking office, to witness a magical conjuration & journey of a life-time.