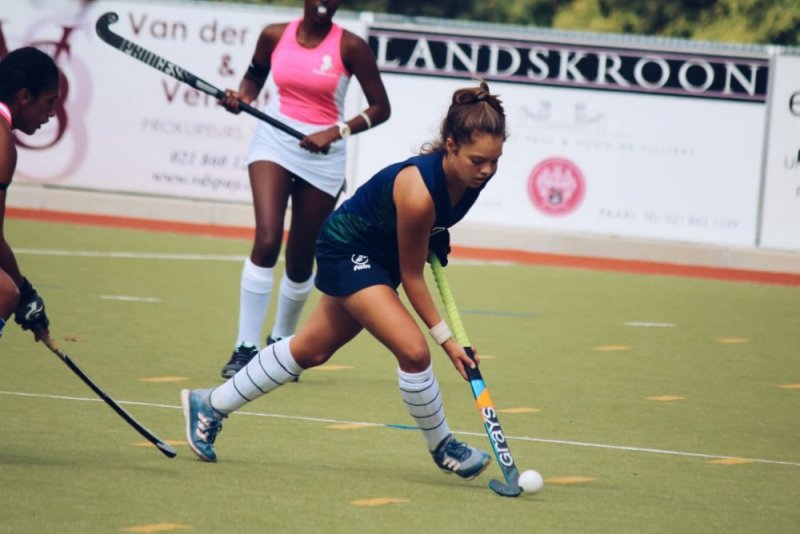 Clarendon captain Aspen Gilbert will be running out for her 50th cap when the SPAR Eastern Cape Schoolgirls Hockey Challenge is played at Merrifield College in East London on May 9.

For long-serving Clarendon player Aspen Gilbert the resumption of the SPAR Eastern Cape Schoolgirls Hockey Challenge on May 9 in East London will have special significance.

The 17-year-old matric pupil will be able to put a frustrating year, deprived of sport, behind her as she runs out for her 50th game for the school’s first team at the EL Coastal playoffs of the tournament at Merrifield College.

Gilbert acknowledged the disappointment of the Covid-enforced break in 2020, but preferred to dwell on the positive.

“Despite the challenges of last year, my teammates and I are feeling exceptionally excited, privileged and more than ready to return to competitive sport,” she said.

“While it was sad to miss the Hockey Challenge in 2020 after we played in 2019, we are thrilled that the tournament is back this year.

“This will be a very special time for me, having played 49 games for the first team so far.

“The absence of school sport last year prevented some of us from reaching the mark of 100 or more caps, which would have been a special achievement, but we are now ready to move forward.”

The Clarendon captain, who has been in the first team since Grade 10, when she was 15, said their desire to compete had gained even more intensity following the lack of schools sport.

“We are all eager to see how far we can get and hope to reach the finals,” said Gilbert.

“We are aiming high this year to add additional fixtures to our list in case of any interruptions due to the uncertainty of Covid-19.

“I want to do well as it might be the last tournament of this nature I and my vice-captain, Carla Naude, play for the school, being the two Grade 12s in the team. We would like to end on a high.”

In previous tournaments, Clarendon won the EL Coastal playoffs in 2017 – when they were also crowned provincial champions – and 2019.

With matches being played over a shortened format of 20 minutes, Gilbert underlined the importance of starting well.

“The plan is to get a nice rhythm going in the first game which we can sustain in the other fixtures to keep the team on a high,” she said.

“Basically you want to keep that momentum throughout the day, because the shorter games don’t give you much of an opportunity to experiment with any changes.

“My message to my teammates will be to play every game like it could be your last as that could very well be the case.

“We need to give it our all and appreciate the fact that we have been given the privilege to play.”

SPAR EC promotions and events manager Alan Stapleton was delighted to have the event back on track.

“It’s wonderful to be able to welcome back 100s of young hockey players to the SPAR Schoolgirls Hockey Challenge.

“It’s a tournament geared to bring schools which do not often have the opportunity to compete against each other together in a spirit of competitive camaraderie,” he said.

“While all Covid protocols will be followed, with no spectators, the tournaments will enable our young hockey players to again come together in a celebration of women and sport in a spirit of living limitlessly.”

The EL Coastal leg is one of five tournaments in this annual series. It will be played on a round-robin format and will be contested by Cambridge, Clarendon, Hudson Park, Merrifield, Port Rex and Stirling. The top two teams on the log will meet in a final.

Play starts at 8am and the final is scheduled for 3.05pm.

Other regional playoffs will take place in Port Elizabeth, Queenstown, Grahamstown and George, with the winners qualifying for the provincial finals at Collegiate in PE on July 31 and August 1.