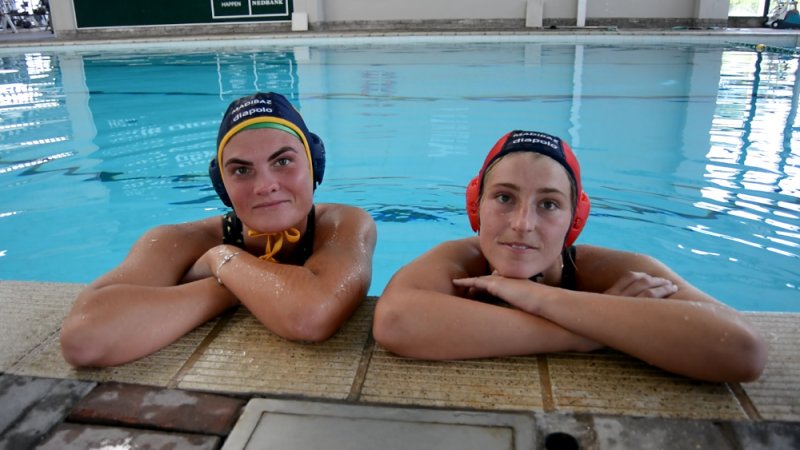 Madibaz water polo players Ashleigh Vaughan, left, and Meghan Maartens have been included in the South African team to compete in the Tokyo Olympic Games, which takes place from July 23 to August 8.

With a total of five representatives included in the South African team, Madibaz Sport personnel will be eager to make an impact at the Olympic Games in Tokyo next month.

Those who will be travelling to Japan for the world showpiece from July 23 to August 8 are water polo players Ashleigh Vaughan and Meghan Maartens as well as coaches Delaine Mentoor (women’s water polo), Cheslyn Gie (men’s hockey) and Jenny Kingwill (athletics).

Kingwill, the jumps coach, also attended the Rio Olympics in 2016, while her colleagues will be making their debut at the world’s biggest sports show.

For Vaughan and Maartens, it was a moment to savour when they learnt of their selection after months of anxious waiting.

“I really was shocked as it was surreal seeing my name pop up on the screen,” said 21-year-old Vaughan.

“In fact, I’m still a bit in shock as it was nerve-wracking awaiting the final announcement.”

So intense was the situation for Maartens that she admitted she could hardly even “really remember my reaction”.

“It all happened so quickly that I kind of almost blanked out,” the 22-year-old said.

“It has been a very tense few weeks, not knowing when the team is going to be announced. But it is a big weight off of our shoulders knowing the final outcome.”

“I know the hard work these players have put in, more so in these difficult times when training facilities were not always available due to the pandemic restrictions.

“They continued to persevere and remain positive, so deserve this accolade so much.”

She added that the achievement was even more special as this was the first ever SA women’s side to compete in the Olympics.

“It shows that the groundwork that has been done over the past couple of years at Madibaz is working and having two players at the Olympics means so much for the future of water polo at the varsity.”

“Years ago when she was a student she played a pivotal role in the success of the team. Now she has done the full circle, achieving much as coach of the Madibaz side and being appointed as the national coach.”

Despite some of the challenges they faced in preparation, such as two training camps being cancelled due to Covid-19, Mentoor was looking forward to seeing the fruits of their labour.

“I hope to see our team grow and get better with each game,” said the head coach. “I would like to see a certain level of confidence in their individual play as I know the hard work each of them has put in.

“There is one thing no one can take away from our ladies and that is their grit and determination.”

In the athletics arena, Kingwill will be pivotal in Team SA’s quest for medals in Tokyo.

As a former athlete who has mentored many Nelson Mandela University student-athletes in long and triple jump, she will take charge of ace long jumper Ruswahl Samaai, who is a strong medal contender.

She said her sole responsibility was to support the athletes competing in the jump events.

“Naturally the aim is to help them to try to get a place among the medals, which is a tough challenge because of their lack of exposure at international meetings,” said Kingwill.

“Then you get an elite competition such as the Olympics and it becomes a real test to compete with the best in the world.”

Men’s hockey assistant coach Gie said he was excited about the “fantastic opportunity”.

“It’s a great honour to once again represent my country at the highest level,” said the Madibaz Sport hockey manager.

“I have several duties, among them to oversee defensive penalty corner systems and tactical analysis, as well as providing individual team information of the opposition to the coaches.”

Gie added that the team’s objective was to qualify for the quarterfinals.