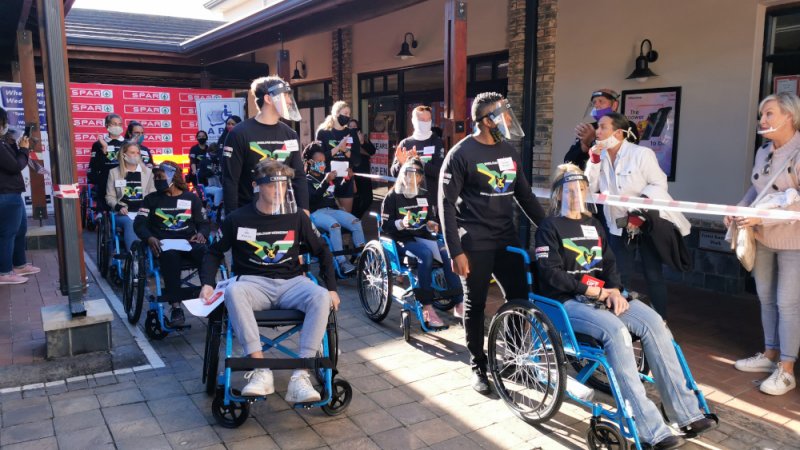 Local personalities gave 67 minutes of their time at the launch of Spar Eastern Cape and APD's Wheelchair Wednesday campaign, which took place at SUPERSPAR Sunridge in Port Elizabeth on Mandela Day last year. This year's campaign will be rolled out on Wed

The launch of the 10th annual Wheelchair Wednesday campaign will pay tribute to late South African president Nelson Mandela when it takes place at SUPERSPAR Hunters in Gqeberha on Wednesday.

Lockdown restrictions due to Covid-19 delayed the project this year, but SPAR Eastern Cape promotions and events manager Alan Stapleton said everything was ready to be rolled out during October.

The Gqeberha-based retailer will again join forces with the Association for Persons with Physical Disabilities in Nelson Mandela Bay to underline the plight of people in wheelchairs while, simultaneously, raising funds for the purchasing and donation of wheelchairs.

The project also raises awareness among businesses in the metro and beyond to ensure their facilities provide easy access for wheelchair users.

Previously volunteers were strapped into a wheelchair for four hours each Wednesday during a selected month, but this time they will spend 67 minutes experiencing what those with mobility difficulties confront every day.

This acknowledges the role played by Mandela in South African society after the original launch on Mandela Day (July 18) was postponed because of lockdown.

APD chief executive Cecilia Fourie said they also understood that it was difficult for businesspeople to spend four hours in a wheelchair and felt the switch would be a nice touch to honour the former president.

She said another change this year would be to invite five beneficiaries each Wednesday to present them with their wheelchairs, instead of waiting for the handover at the end of the campaign.

“We are targeting to raise our overall number of donations to 1 400,” she added, saying that 2 500 volunteers would have taken part in Wheelchair Wednesday since the debut event.

Stapleton said they would be extending the reach by involving those who were visually impaired.

“Last year we welcomed on board the Amputee Support Group and this year we decided go a step further by placing a focus on the visually impaired as well.

“The Nkosinathi Foundation will be involved and we are looking forward to broadening the concept through their organisation.”

He explained that the people tasked with pushing the wheelchairs would be asked to wear vision stimulation eyewear.

“This will expose that person to the challenges which people who are visually impaired face in going about their daily life. The ‘seated one’ will have to direct the pusher.”

The connection with the Amputee Support Group last year set up the Collect a Crutch drive.

Headed by Brian Paddey, this organisation concentrates on collecting walking aids for the many people who cannot afford them, while also offering counselling and material support to amputees and their families.