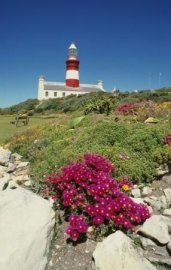 Geographical extremes capture the imagination. From ancient mariners to contemporary mankind, the quest has always been to reach the poles, sail around the tips of continents, conquer the highest peaks and dive to the ultimate depths. This is the same spirit that captivated the explorers of yesteryear who braved one of the most challenging sea crossings of their time: the Atlantic-Indian Ocean crossing via Cape Agulhas. As the southern-most tip of Africa, it has always had its mysteries and adventure, and still captures the imagination of contemporary explorers.

Amongst the mysteries associated with this region, is the legendary âCape of Stormsâ which wrecked many ships en route to the east via Cape Agulhas. Ancient people also left their mark on the landscape. For example, archaeological middens remind contemporary man of a successful hunter-gathering culture that was in harmony with its natural environment; and a cultural heritage that dates back thousands of years to when the Khoi-khoi people trapped fish using ingeniously constructed tidal traps. This windswept, ruggedly beautiful coastal plain at the southern-most tip of Africa, with its rich cultural and natural heritage, has recently been proclaimed as the Agulhas National Park.

There are several small towns in the area encompassed by Agulhas, but no park run camps as yet.

Adventure and Outdoor Activities (Planned tourist activities)
Several nature trails and a unique trail to traverse the southern-most tip of Africa.
An environmental education centre.
A world class museum and interpretative centre.
The Agulhas area has several attractions, which draw tourists to its shores each year. The nearby towns LâAgulhas and Struisbaai offer several water sports such as swimming and angling. Within the confines of the developing national park, tourists can enjoy the following places of interest:

The southern-most of Africa â The official position of the tip is 34Â° 49â 58" south and 20Â° 00â 12ââ east. A cairn marks the tipâs exact location. It is at this longitudinal point that the Atlantic and Indian oceans officially meet.
The lighthouse at Cape Agulhas â The lighthouse was built to aid the early explorers on their passage of the rough seas off Cape Agulhas. Seventy-one steps lead up to the top of the second oldest working lighthouse in southern Africa. Stone mined from the adjacent limestone quarry provided the raw materials for its construction. The building also houses a unique lighthouse museum. Remains of ancient stone fish traps used by the Khoisan people can be seen to the east of the lighthouse.
Graveyard of ships â The Zoetendal, Birkenhead and Armiston are some of the many shipwrecks found along the Agulhas coastline. Showpieces from these shipwrecks are on display at the Bredasdorp Shipwreck museum. Visitors to the are can still see the remains of the Meisho Maru 38 wreck on the shores of Cape Agulhas.
Fynbos â The Agulhas Plain has great diversity of flora. The Agulhas area contains representatives of unique vegetation such as limestone fynbos. Although most species bloom between May and September, there are flowers to be enjoyed in any season.