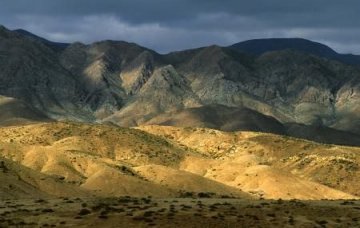 Conjure up a desolate and forbidding landscape, seemingly devoid of life, except for some people dotting along the horizon. Make a startling discovery upon closer inspection when the mirage dissolves into the human-like half-mens (half person) and the harsh environment prove to be a treasure-chest containing the worldâs richest desert flora. Miniature rock gardens, perfectly designed by nature, cling precariously to cliff faces. Tiny succulents, mere pinpoints against a backdrop of surreal rock formations, revel in the moisture brought by the early morning fog rolling in from the cold Atlantic Ocean.

Rugged kloofs, high mountains and dramatic landscapes that sweep away inland from the Orange River divulge the fact that you are now in the vast mountain desert that is the |Ai-|Ais/Richtersveld National Park, an area managed jointly by the local Nama people and the South African National Parks. This is a harsh and unpredictable land where water is scarce and life-sustaining moisture comes in the form of early morning fog â called âIhuriesâ or âMalmokkiesâ by the local people â which rolls in from the cold waters of the Atlantic Ocean, sustaining a remarkable range of small reptiles, birds and mammals. A staggering assortment of plant life, some species occurring nowhere else, is to be found here, with gnarled quiver trees, tall aloes and quaint âhalf-mensâ keeping vigil over this inscrutable landscape.

The park is only accessible by means of a 4x4 vehicle, but vehicles with high clearances such as combiâs and LDVâs do travel in the park. Sedan vehicles are not permitted. There is no specific route that can be booked in advance.

Sendelingsdrift (Reuning Mine)
A new rest camp has been built which consists of ten chalets (4 x 4 bed units and 6 x 2 bed units).
All chalets are equipped with air conditioning, fridge and two plate electric stoves.
All units have showers, front porches with views over the Gariep (Orange River) and there is a swimming pool in the camp.
There is still landscaping work being done and some further construction work is planned.

A new campsite designed to service the transfrontier route with six sites will be open from 3 July 2005. Ablutions with showers (cold water only).

Potjiespram
New ablutions have been built and showers (cold water only) are available.
There are 18 Campsites and an Environmental Education Centre where school groups can stay over in traditional Nama huts.
De Hoop
This remains one of the most popular spots in the park and ablutions (cold showers) have been built to service 12 Campsites.
Richtersburg
As for De Hoop, this camp, which lies on the banks of the river, has been upgraded with ablutions (cold showers) to service 12 Campsites.
Kokerboomkloof
The 8 Campsites are serviced by Dry Toilets.
No water is available on site and the nearest water point is at Richtersberg (32 km) away.
Tatasberg and Ganakouriep Wilderness Camps
Each camp consists of:
4 x 2-bed self catering units with showers,
12 volt lighting system,
fridges and gas stoves (hot and cold water).
Should problems occur with the lights, paraffin lanterns are available.
A caretaker is resident on site.
The units will be swept out and the area kept clean but the washing of utensils and making of beds will be the responsibility of the guests for the duration of their stay.
Please note that the water at Ganakoeriep, Tatasberg and Hakkiesdoring is not suitable for drinking and it is recommended that guests should provide their own drinking water.

Hiking Trails Base Camp
The Hiking Trails Base Camp, which is situated in the panoramic Ganakouriep Valley and accommodates 9 people opened in mid-July. Gas stoves, fridges and hot showers are available. The hiking trail itself is not open due to a shortage of qualified guides but groups under the control of an appropriately qualified guide may be allowed to hike. It is strongly recommended that they take a person with extensive knowledge of the area with them to enhance their experience and minimize the risks associated with this terrain and climate. Bookings for this unit will be taken three months in advance until such time as the trails issue has been resolved. It is also an ideal location from which to explore the Park by vehicle. Note that the water is not suitable for drinking and it is recommended that guests should bring their own drinking water.