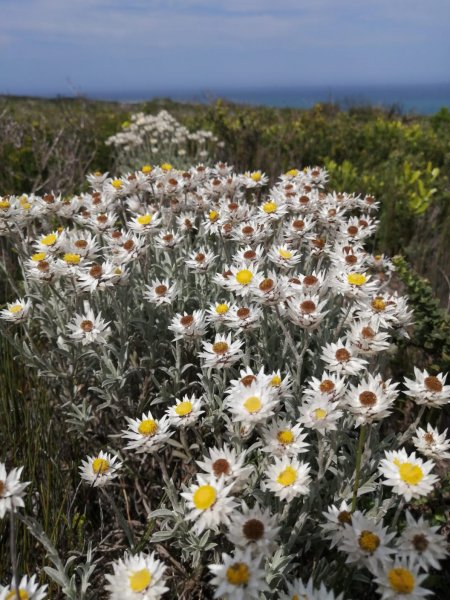 The Coastal Fynbos Trail starts to the east of the village of Sappershoek and is located on the land side of Marine Drive. Because of bad soil quality, slightly lower rainfall, underlying rock and salty winds, the Fynbos, also known as the Cape Floral Kingdom, consists of over 9 000 species of plants. The trail is particularly attractive in spring when a lot of these are flowering. The full circular trail covers about 7km, although there is a shorter 4km option available in you are still only a 'middle distance' walker.
COASTAL FYNBOS TRAIL

This circular trail of about 7 km starts at Sappershoek which is located at the east end of the seaside village of Schoenmakerskop. An inland route is followed through the coastal fynbos to a cellphone tower, returning to Sappershoek along the top of the ridge overlooking the sea.

The area between Schoenmakerskop and Summerstrand is known as Driftsands after the shifting by-pass sand dune system that used to cover the area. The sands were stabilized at the beginning of the 1900s. The trail keeps to the sea side of the old by-pass dune systems. In order to stabilize the sand dunes Australian wattles such as Rooikrans and Port Jackson were planted as were Eucalyptus trees planted in an attempt to start a commercial forest.

The underlying rock is Table Mountain Sandstone (TMS). TMS supports fynbos, found only between Port Elizabeth and Cape Town. Fynbos is the smallest, most diverse and most endangered of the worldâs six floral kingdoms, supporting approximately 9000 plant species of which 70% are endemic.

Along the trail calcrete outcrops, derived from calcium rich marine deposits and deep dune sands together with variations in topography and the influence of salt laden winds and fire have led to a mosaic of vegetation communities. The area resembled a desert after huge fires in January 1998. The vegetation has recovered and the burnt areas are dominated by low Asteraceous fynbos.

In areas that the fire missed, the fynbos / coastal dune thicket mosaic is much taller and the fynbos is dominated by Metalasia and Agathosma (buchu). Orchids (e.g. Eucornis, Satirium) are a common sight in spring. Without fire the coastal dune thicket, comprising many forest species, would become more dominant.

On the trail look out for the butterfly Thysbeâs Copper, that reaches its easternmost limit here. In flight it has a blue hue, but appears orange at rest. Small Grey and Yellow Mongooses may be seen as well as Cape Grysbok. Keep a good look out over the sea for whales. Southern Right Whales are present mainly August â early October, Humpbacks migrate along this stretch of coast between April and early December and can give spectacular displays.

NOTE: Use of the area is entirely at your own risk.
Contact / ReservationsCoastal Fynbos Trail