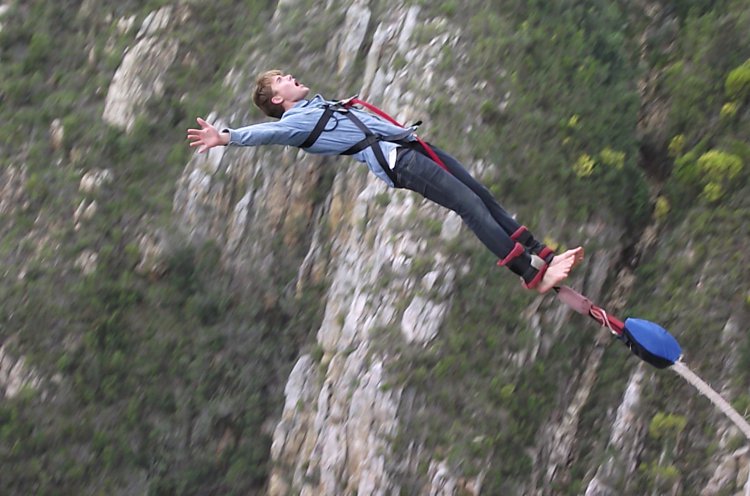 THE BLOUKRANS BUNGY EXPERIENCE
The bungy jump takes place from the top of the arch of Africaâs biggest bridge. To get out to the jump point we send you out on a zipline from the bank to the arch. From there, itâs time for your bungy jump - the worlds best bungy!

Two more unique experiences happen in order to get you back to land. First of all, we offer you a winch ride back up to the top of the arch after your jump. Then you get to walk the suspended walkway back off the bridge. The walkway is bolted to the underside of the road deck 216 meters above the Bloukrans River with spectacular views and a final exposure to the full height of the bridge.

This will surely be one of the most amazing experiences of your life!

BOOK ONLINE!
âWe are here to give you the most amazing experience of your life!â
That pretty much sums up why we are doing what we do. How we do that is by keeping everyone safe, treating everyone with respect and helping people have fun!

We do all this with a long bungy cord attached to Africa's largest bridge!

The Bloukrans Bungy is the worldâs highest commercial bungy bridge. It is also the highest commercial natural bungy jump in the world. We have had a number of world records associated with Bloukrans. In 2003, Bloukrans bungy was recognised as the worldâs highest commercial bungy jump. In 2008 we were part of two more world records. Veronica Dean performed 19 bungy jumps in one hour and Bill Boshoff performed 101 jumps in a 24 hour period. Billâs world record was subsequently surpassed, in 2011 we facilitated Scott Huntley to regain the world record with 107 jumps in the 24 hour period.
We have played host to the likes of Prince Harry, Jack Osbourne, Thabo Mbeki, The Zuma family, Bobby Skinstad, Hansie Cronje, Fanie De Villiers, Kelly Slater, Andy Irons, The Amazing Race, and many more famous and not so famous visitors - you never know who you could meet on any given day at Bloukrans, the worldâs highest bungy bridge !

We have also been contracted by ITVâs âIâm a celebrity get me out of hereâ, The USA production of âThe Amazing Raceâ and have featured in a number of local and international advertising productions.

The owners of Face Adrenalin and the Bloukrans Bungy jump were instrumental in introducing bungy jumping to the African continent in 1990. The first bridge to be bungy jumped off, on a commercial basis, was in Mossel Bay â the Gourits River Bridge, however this was to be surpassed.

In Dec 1997 we established the current worldâs highest commercial bungy bridge from the Bloukrans River Bridge. This bridge borders the Eastern and Western Cape and is situated in the Tsitsikamma area of the Garden Route.

The Bloukrans Bridge is 216 meters (709 feet) above the Bloukrans River. Our bungy jump operations are open 365 days of the year during all weather conditions.
Contact / ReservationsFace Adrenalin (Bloukrans Bungi)