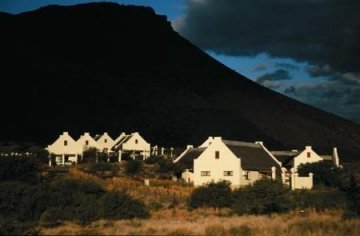 Towards late afternoon, the great, unyielding canopy slowly softens its fierceness, and from pastel shades of pink and blue, the colours deepen, setting the endless Karoo canvas ablaze with glorious hues of orange and red. The Great Karoo is a vast and unforgiving landscape of which the Karoo National Park is but a small portion. Being the largest ecosystem in South Africa, the Karoo is home to a fascinating diversity of life, all having adapted to survive in these harsh conditions. Karoo National Park is dominated by the lofty Nuweveld Mountains and rolling plains, where many species that originally occurred here now occupy their former ranges.

The Karoo National Park has a wide variety of endemic wildlife. Many species have been relocated to their former ranges - such as black rhino and buffalo, as well as Cape mountain zebra. Over 20 breeding pairs of black eagle find sanctuary within the park.

There is also a wide diversity of succulent plants and small reptiles.


Areas Of Special Interest
The Klipspringer Mountain Pass not only provides visitors with spectacular views, but the pass is also an example of civil engineering toil and precision.
Things to Seek
Black Eagle â with around 20 pairs of these eagles breeding, the park can lay claim to one of the highest densities of this regal species in Africa
Tortoises â the park hosts 5 different species, the highest density of species per equivalent area anywhere in the world
Cape Mountain Zebra â this species came close to extinction early in the 20th Century. It is well established in the park and visitors have the opportunity to compare its bold stripe pattern to that of the âquaggaâ strain
Springbok â the emblem of the park and present in high numbers. This is a reminder of the once massive herds that crossed the Karoo on annual migration that could stretch for several kilometres.

Main Restcamp
All accommodation is serviced daily and equipped with bedding, towels and soap.
Breakfast in included in the acccommodation costs, with the exception of camp sites.
7 Cape Dutch style family units, each with two bedrooms (six beds in total), en suite bathrooms (bath and shower) and fully equipped kitchen (kettle, toaster, stove, oven, fridge, cutlery and crockery.
19 Cape Dutch style units, each with a bathroom (shower and bath), open-plan areas with 2 single beds and a double sleeper couch and kitchenettes with basic equipment. Two units have been adapted for persons with limited mobility and these contain showers only..
10 Cape Dutch style cottages - one bedroom (double bed) open plan kitchen (microwave and stove) and lounge, bathroom (shower).
Camping
24 award-winning camping and caravan campsites amidst a veritable green oasis in the rugged Karoo environment with communal ablutions (shower and baths) and kitchen facilities with stove plates and scullery.
All caravan sites equipped with 220V power points.
A maximum of six persons, one caravan with a side tent and one vehicle, or one tent and one vehicle, or one autovilla or one motorised caravan will be permitted per site.
Laundry with a washing machine and tumble drier