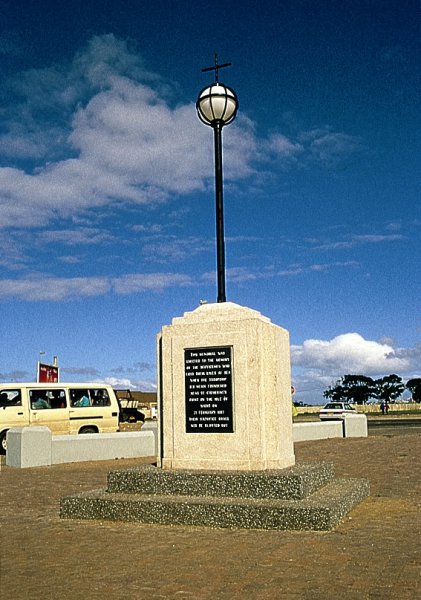 Mendi Memorial commemorates the lives of the South African Native Labour contingent who died on the troopship "SS Mendi" after sinking off the Isle of Wight, near St. Catherineâs Point on 21st February 1917. The "Mendi" sank after colliding with SS "Darro" in heavy fog.

The SS Mendi was a British 4,222 GRT passenger steamship that was 110m long and 14m wide. It was built in 1905 and sunk with great loss of life on 21 February 1917 when it collided with the large cargo steamship, Darro in the English Channel south of the Isle of Wight.

The Mendi sank killing 646 people of which most were black South African troops. Most had never seen the sea before this voyage, and very few could swim. The officers and NCOs were white South Africans. Darro survived the collision but Mendi sank, killing 616 South Africans (607 of them black troops) and 30 crew.
The high rate of attrition of British soldiers in World War 1 resulted in a desperate call to the Colonies for men to relieve white men for active duty. In South Africa the government of Louis Botha promised 10 000 non-combatant black soldiers. These soldiers were volunteers who signed up for a year. They received a better pay than regular soldiers to entice them. Many volunteers from the rural areas joined to escape the effects of a devastating drought, while others hoped it would lead to a better political dispensation for blacks.

The troop ship, the SS Mendi was carrying 806 soldiers of the South African Native Labour Contingent to Le Havre when it was rammed by a British merchant ship â the SS Darro - returning from Le Havre. It happened in dense fog, before dawn on the 21st of February, 1917, 11 (eleven) miles off the Isle of Wight, in the English Channel. The force of the collision almost cut the Mendi in half. The Darro reversed out of incision in the hull of the Mendi, leaving it to sink within 20 minutes. 609 black soldiers perished, along with six white NCOâs and two white officers. 30 crew members of the Mendi also died as a result.

According to later sources, a number of soldiers did the death drill at the instigation of the Reverend Isaac Dyobha while the ship was sinking. He called on the men to die like warriors. This heroic deed gave rise to South Africaâs highest medal of valour, the Order of Mendi. The date of the disaster is commemorated annually as Armed Forces Day in South Africa.
Immediately after the collision, the Darro stood stationary some 200 metres away from the sinking Mendi. They offered no assistance to the men in the freezing water. The subsequent enquiry held in London resulted in the captain of the Darro, Captain Stump, receiving a yearâs suspension of his license.

The remainder of the black soldiers and their white officers were sent to France to fulfill their duties. Word of the disaster did not reach all the families back in South Africa, although the Union parliament held a minuteâs silence to remember them when the news broke.

Men of the Mendi is a tribute to the soldiers â black and white â who perished, as well as to those who continued on to the killing fields of France.