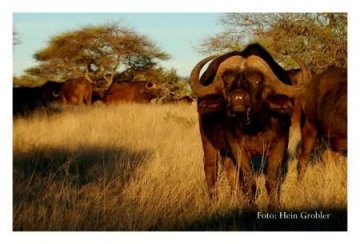 "Where Endangered Species Roam..."
Mokala is SANParks newest park, situated approximately 80km south-southwest of Kimberley, and west of the N12 freeway to Cape Town. Nestled in the hills, Mokalaâs landscape boasts a variety of koppieveld (hills) and large open plains.

The isolated dolerite hills give the place a calming feeling of seclusion. A big surprise awaits when you pass through the hills and are confronted by the large open sandy plains towards the north and west of the Park. Drainage lines from the hills form little tributaries that run into the plains and drain into the Riet River.

Mokala is a Setswana name for a Camel Thorn (Kameeldoring). These trees occur in dry woodland and arid, sandy areas and are one of the major tree species of the desert regions of Southern Africa. This immensely important species has a great range over the Northern Cape and varies from a small, spiny shrub barely 2m high, to a tree up to 16m tall with a wide, spreading crown.

The Camel Thorn is an incredible resource to both wildlife and humans who survive in often harsh conditions characteristic of this area. Traditionally, the gum and bark have been used by local tribes to treat coughs, colds and nosebleeds. Some even use the roasted seeds as a coffee substitute.

Things to Seek
Black Rhino
Tsessebe
Roan antelope
White Rhino
Black Wildebeest
Indigenous plant species
Activities and Attractions
This is a brand new park with a lot of opportunities for outdoor adventure. A number of activities such as mountain biking, day walks, sunset and night drives and bush braais will be on offer. The park also plans to take full advantage of perfect night skies and star-gazing as a night time activity will also be offered along with wildlife documentary DVD shows. Rock art painting and engraving excursions, and guided horse trails will also be introduced.

This is merely the beginning ...