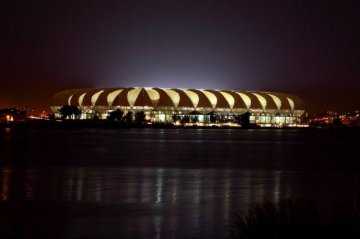 Stadium Tours are conducted on Mondays, Wednesdays and Fridays between 13h00 and 16h00. Please contact the Marketing Department to book a tour.

The duration of the tour is 30 minutes and includes access to the VVIP area, the change rooms and upper level of the stadium. For full tours a maximum of 30 people are allowed. Tours for larger groups are conducted as a sit in session in the stadium bowl and are not walk-abouts.

t: +27 (0)41 408 8900
info@nmbstadium.co.za
Situated in the North End of Port Elizabeth on the shores of the North End Lake this state of the art multipurpose stadium has been constructed by Grinaker-LTA in a 50:50 joint venture with Dutch company Interbeton, since March 15, 2007, when the tender was awarded. The architectural companies are: Architectural Design Associates (Port Elizabeth)(PTY)Ltd. And Dominic Bonnesse Architects cc.

The Stadium Capacity is 46 000. The building is approx. 40m high from field level to top of roof and consists of six levels in West Stand and 5 levels in the North, South and East Stands

The playing field consists of natural grass and the outer /surrounding area artificial turf. Three VIP/VVIP lifts has been installed, Two in the West Stand and One in the East Stand, as well as Six passengerâs lifts has been installed around the Stadium Two additional lifts will be installed for the Legacy phase. The stadium has a total of 11 lifts. No escalators will be installed. There are to be 32 turnstiles colour coded gates on level 2 for spectators to access their seats and four ramps leading up from level 2 to level 5.