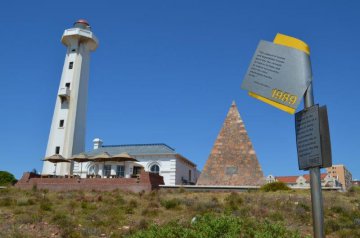 The MBDA's Route 67 consists of 67 Public Art Works symbolising Nelson Mandela's 67 years of work dedicated to the Freedom of South Africa and includes 67 steps leading up the second largest flag in Africa. The artworks were designed by local artists from the Eastern Cape. The route is proud celebration of our cities heritage and history. This is a must see stop for the whole family to walk and to enjoy. Guided Tours of Route 67 is available at the Donkin Visitor Information Office inside the lighthouse building.
Route 67 starts at the Campanile and climbs the staircase to Vuyisile Mini Market Square which is the centre of the City.

From the City centre the route continues through the staircase at St Mary's Terrace, the experience of the route erupts in a celebration of colour, art and heritage that meanders up to the Donkin Reserve to the Great flag on top of the hill.

The following artworks are represented on the route:

1 Way Finding Markers: The Wayfinding Makers start at the Campanile the city and the Donkin Reserve to the Nelson Mandela Metropolitan Museum

2 Campanile Frieze: By Mkhonto Gwazela. A celebration of the indigenous heritage of the Nelson Mandela Bay and Eastern Cape area is sculpted through visual images set into a cast concrete curved beam.

3 Wall of texts: Wall of Texts by Mkonto Gwazela. A written flow-poem (by Lelethu PoeticSoul Mahambehlala) engraved onto locally-sourced granite accompanies the Campanile Frieze and celebrates the indigenous and locally born contribution to arts and culture.

4 Talking Woman 1: By Lorinda Pretorius. The sculpture consists of multiple layers of painted glass to show a form passing thoughts and feelings about the past events that has led the city to where it is today.

5 Talking Woman 2: By Nompumezo Gubevu. Using colour glass, oxides and powders this female figure was created as a symbol of what women have that unites them rather than what divides them.

6 Talking Woman 3: By Anver Chaizzari. Maps from different times in Port Elizabeth's history illustrate how people have been instrumental in the changing landscape. This is contained within the Women's body, making her vehicle for the idea that many generations have lived and died in this area.

7-16 Identities: By Lubhi Mtathi. A series of colourful and evocative portraits that depict young South Africans from a range of cultural backgrounds are installed on the pillars underneath the Settlers Way flyovers.

17 Walk of Words: By a collective of crafters. A collaboration of artists used value words in different languages to represent the New South Africa and it's prosperity as a democratic nation.

18 Bus Station Mural: By 4 Blind Mice. This mural is carefully constructed design that celebrates public transport and the daily journeys undertaken by the people of this city.

19-29 Banners linked to Red Location: This is a series of posters,showing 'teaser' sections of 10 of the works acquired to form the basis of the permanent collection of the new Red Location Art Gallery

30 Fishbone: By Imbono FJA Architects. The FishBone is an architectural element intended to visually anchor the old Jerry Street to Vuyisile Mini Square and encourage pedestrians to trace a historical path between the city and the harbour.

31 Conversations with the Queen: By NMMU Sculpture Collective. It is 1956 to 1965 and Nelson Mandela, Goven Mbeki and Raymond Mhlaba are in conversation with the Queen as Robert Sobukhwe and Steve Biko look on while this three way conversation unfolds.

32 Vuyisile Mini: NMMU Sculpture Collective. This piece forms a part of Conversation with the Queen.

33 76 Youth: By a workshop collaboration, The artwork is a statement about the 76 generation and represents the spiritual journey undertaken by those who fought against oppression.

34 Chapel Street Crossing: By Mthetheleli Williams. A pattern of colourful paving bricks flow from all directions over the crossing in Chapel Street. This represents the gathering of masses that are voted in the 1994 elections.

35 Tower Sculpture: By The Workplace Architects. The Tower Sculpture acts as a beacon to announce the journey through the Donkin Reserve and responds to the surrounding elements to allow wind and light to bring it to life.

37 34 Lights: Collaboration. Voting Queue and the Mosaic Stairs, telling a story about past, present and future.

39 Election Queue/Votes of the future: By The Workplace Architects. The Voting Queue represents the voting line that was formed at the 1994 elections. VOTES OF THE FUTURE. A second application on to the Voting Queue path, saw over 3 000 of Nelson Mandela Bay's youth leave their mark as future voters.

40 Whites Road Wall: By Mark Wilby in collaboration with Bongani Njalo, Bamanye Ngxale, Jason Olivier, Gabriel Chaponda, Siya Mboniswa. History is often shaped by momentous events, while cities with their alleys, streets and venues are formed by the layered rhythms of daily necessity. This rhythm of place, shaped by the everyday, becomes the song of the city.

41 Fish Bird: By Mxolisi Dolla Sapeta. The Fish Bird is returning back to the Donkin to the ownership of this transforming site.

42 Piazza Mosaic: By the NMMU ceramic collective. This 470 square meter mosaic, situated between the Pyramid and the Great Flag celebrates the multi-cultural, the heritage, the diverse histories and abundant fauna and flora that characterises the city and the province.

43 Great Flag: Trident Support. The biggest South African flag sits within the Arts Journey in Port Elizabeth as a point in space that marks the Donkin Reserve as an important public space and celebration of the Port Elizabeth city's heritage. The flagpole is 65m high, the second highest flagpole in Africa, and the flag itself is the size of a tennis court. The flag gets raised and lowered every day by the Prince Alfred's Guards.

44 Voting Line: By Anthony Harris/ Konrad Geel. The life-size laser-cut steel figures form a symbolic voting line that evokes a memory of voters as they were seen in the country's first democratic elections in 1994.

45 Windward: By Anthony Coke. The shapes of these sculptural benches hint a Port Elizabeth's nautical history while the title refers to the city's popular name, the "windy City" GRAFFITI by specific entity.

46 River Memory: By Duncan Steward. The artwork evoked the streamlet that once trickled down to the sea before it was land-filled, making way for what is now Donkin Street (circa 1805s).

47 Untitled: By Anton Momberg. The piece has been left untitled with the features and clothing on the female figure deliberately neutral, as the work is meant as a conversation piece rather than a conceptually specific entity.

48 Welcome Carpet: By Lisbet Demeyer. As it title reflects, the Quartz Carpet and bead artwork is a welcoming celebration and luxurious experience hinting at the cultural context of the Eastern Cape and leading diverse local cultures and visitors on to the Donkin Reserve.

51 Harmony in nature: Dominique Gulliot in collaboration with Pumlani Kwayiyo, Mxolisi Malcolm Madela, Jane Du Rand and team. This old optical technique used by the likes of Leonardo Da Vinci and Michelangelo, is a combination of optical illusion and mathematics.

52 The seated couple: By Nico Swart. Two minimalist figures carved from Oregon Pine are seated on high chairs overlooking the Anthenaeum foyer. They welcome guests and encouraging conversation in this social space.

53 Anthenaeum Collection: Various Artists. An exhibition of large works was curated by the Anthenaeum to complement the style and grand scale of the building walls with no restrictions placed on subject matter or content. A total of six artworks were selected by artists in different stages in their careers.

54 artEC Mural: Bongani Njalo/ Gabriel Chaponda. This mural is like a mirror being held up to the residents of central and greater Port Elizabeth. It reflects the diversity of cultural, racial and ethnic backgrounds within the society.

55 artEC Sculpture Courtyard: By George Kockott. The basic concept and underlying icon woven into this piece is one of waves. Waves of one kind or another tie us all together and roll onwards through history in the making of contemporary times.

56 67 Beaded Quotes: a collective of bead workers. This series of artwork are direct response by 30 beaders from the Eastern Cape to 67 qoutes by Nelson Mandela over the last 67 years. Each resultant beadwork adds to a larger experience and abstracted narrative of South Africa's challenges.

57 Tree of life: Work in progress

62 Map: By Shepherd Xego. A lino cut artwork by Shepherd Xego presents his own perspective and journey of route 67. Drawing on architectural features, activities and public artwork, Shepherd guides the visitor through his birds-eye imaginary experiences of the city.

63 South End Glass Sculpture: By Lorinda Pretorius. A sculpture created to commemorate the people who were forcefully removed from the old South End by the Group Areas Act under the Apartheid laws.

64 Uitenhage Untitled: Work in progress. It has been proposed that a bust of Uitenhage-born composer Enoch Sontonga be installed in front of the fountains on this site.

65 Nkosi Sikilele: By The Matrix Architects. The Uitenhage Market Square features a tribute to the composer of Nkosi Sikelele' iAfrica, Enoch Sontonga, who was born in Uitenhage.

67 Guernica: By community collaboration. This work bears eloquent witness so the ongoing painful struggle of rural communities dealing with the AIDS epidemic. It is a lament for the dead, for the injustices of our health system and the staggering grief experience in Eastern Cape villages today. On show at the Red Location Museum.