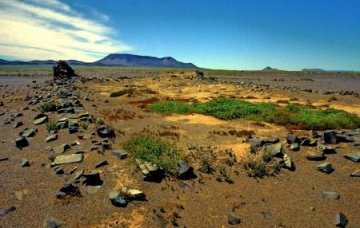 As luminous clouds of dust swirl through the scarred landscape, a Karoo tortoise patiently ambles around in search of a succulent coral aloe. A lizard basks in the sun while suricates and mongoose share the arid plains with orb-web spiders, centipedes and leggy toktokkies.

The 80 000 hectare Tankwa Karoo National Park, proclaimed in 1986 and still in a development stage, is at present in a veld recovery phase and it will be some time before the original vegetation re-establishes itself. Even so, after the occasional shower, the park erupts into a dazzling display of flowering succulents. With an average rainfall of 80mm a year, even a scant shower is reason for celebration.

The Tankwa Karoo National Park is designated as a Scientific National Park, and as such offers no visitor facilities. The park is not open to the public as a rule, but through direct contact with the park management, special entry permission can be requested. However with panoramic views over semi-desert landscapes bursting into a flower paradise during August and September while the spectacular Roggeveld mountains lurks on the horizon and the Rhenoster River flowing through the park, this is a magnificent part of South Africa nobody want to miss. Only two Southern African regions have been bestowed the honour of designation as Biodiversity Hotspots by Conservation International. One is of course the Cape Floral Kingdom, and the other the Succulent Karoo. For those whose image of the southwestern Karoo is a shimmering wasteland to be endured as briefly as possible en route to Cape Town or Johannesburg, this may come as a surprise.

Though the remarkable endemism and diversity of the Succulent Karoo flora (at its most spectacular from August to October) is its most renowned aspect, the Karoo as a whole naturally has a great deal to offer the birder. The Park protects one of the most starkly beautiful tracts of the Tankwa Karoo and is well worth visiting for several reasons, among them its koppie-studded, moon-like landscape, diversity of succulent plants, fine Karoo birding and, perhaps most notably for hardened birders, above-average chance of finding the enigmatic Burchellâs Courser. A dense population of Black eagle breeding pairs are found, and will be seen circling the sky, while the chancers can tackle the cliffs for closer sights of the nests and nestlings. From the top of the Roggeveld Mountain one can even look down and watch them hunting Klipdassies. When taking a night drive, donât be surprise finding the endangered aardvark which occurs in a dense population throughout the park. The park is criss-crossed by a number of vehicle tracks, most of which are easily negotiable by two-wheel-drive. There are also two 4x4 tracks available to compliment the magnificent views throughout Tankwa Karoo. The Parkâs management currently welcomes visitors, on the understanding that no modern facilities are provided, except for the few prehistoric camping facilities, and that prior permission is obtained from Park Management at Tel. 027 341 2389. However, please donât let courser-ambition get the better of you, as should the presence of any birders result in any potentially negative impact on the park, such access may become restricted in the future.

Why the conservation of Tankwa Karoo?
It has a unique environment gradient from the top of the Roggeveld escarpment in the east to the Cedarberge in the west.
It is the most southerly explored environment where the Black Rhino has previously being seen in its natural habitat.
It is also the most southerly turning point of the migrating routes for antelope like the Springbuck.
The migrating corridor for succulent plants is found through Tankwa Karoo.
Two temperature regimes are included in Tankwa Karoo National Park.
Summer- and winter rainfall is included in Tankwa Karoo National Park.