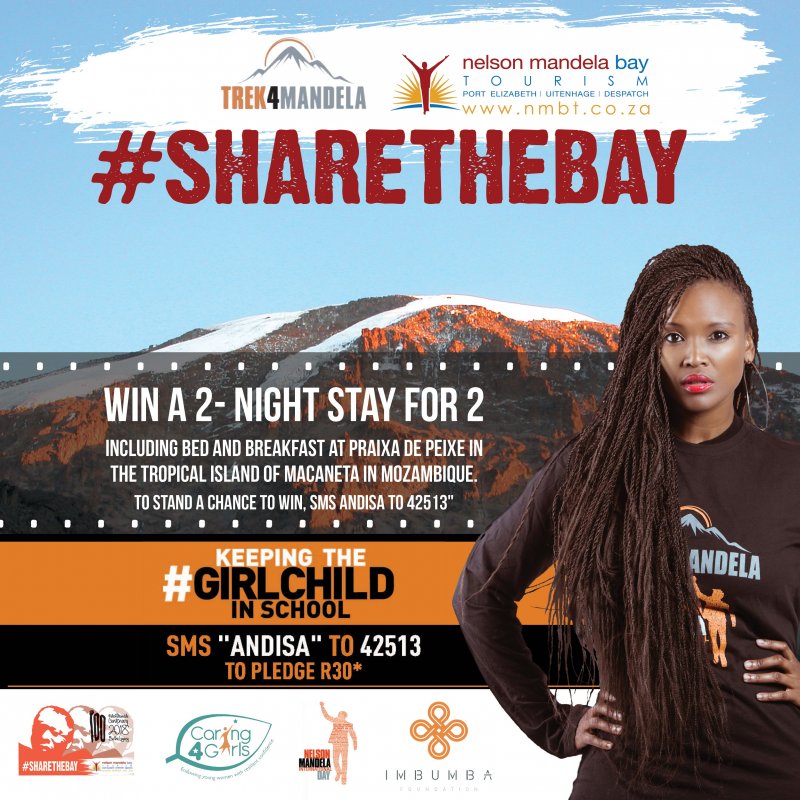 In celebration of the great Mandela Centenary and as a build up to Mandela Day, Nelson Mandela Bay Tourism (NMBT) will be in full support of Andisa Liba, who will form part of the Trek4Mandela team that will summit Mount Kilimanjaro, in an effort to raise awareness and funds for the keep the #girlchild in school initiative. Originally from Nelson Mandela Bay, Andisa has nominated two local schools in the New Brighton township as recipients for donations and support raised by her through participating in the campaign.

The annual expedition to attempt the summit of Mount Kilimanjaro on Mandela Day is to create awareness around the challenges faced by young girls during their monthly cycles and how it affects their education when they miss valuable school days as a result. The climb is used to raise much needed funds to purchase sanitary towels to help approximately 500 000 young girls from impoverished backgrounds to stay in school.

Born and bred in the Bay, Andisa (34), a Cultural Engineer by trade, is an avid hiking enthusiast and nature lover, who also is a firm believer in the value of education and wellbeing of young boys and girls. Her efforts will see much needed support being offered to the girls of Kama Primary School and Molefe Secondary in New Brighton.

“If my involvement can aid in keeping just one young girl in school then I’ve done my bit. I truly believe that if we can do small things with big love we can make a huge difference. This program is a beacon of hope for a brighter future for these young women.” shared Andisa Liba.

The total cost to support one girl is R30 per month or R360 per year. The cost per year covers 12 packs of sanitary towels, Caring4Girls booklet, as well as packaging, transport and distribution to the schools and girls. Nelson Mandela Bay Tourism will endeavour to support this long-term campaign and Andisa Liba with the initiatives to raise awareness and support to improve the lives of young girls in south Africa and Nelson Mandela Bay.

NMBT will have a variety of ways in which the public, both private and business can support this cause. An SMS donation line has been created for the public to donate to the initiative, whilst standing a chance of winning a 2-night stay at Praixa de Peixe in the tropical island of Macaneta in Mozambique.

To stand a chance to win, SMS ANDISA to 42513. All proceeds go to Caring for Girls an Imbumba Foundation initiative. Competition closes on 20 July 2018 and winner will be announced on 1 August 2018.

Commenting on the importance of Mandela’s Centenary and the initiative, NMBT CEO: Mandlakazi Skefile said: “Madiba was a great supporter and admirer of the potential of our youth. As a city named after the great icon, we believe it is our duty to carry his legacy through action. We are proud to stand behind Andisa and the Trek4Mandela team as they embark on this exciting journey in support of keeping our girls in school.”

NMBT will host a special flag raising ceremony at the Donkin Reserve on the morning of Mandela Day, also serving as a drop off and donation drive. Andisa’s trek can be followed on social media by following their trekking leader: @sibusisovilane on Twitter and @sibueverest on Facebook and Instagram. Viewers can also catch updates with Lee-Anne Mannes on Morning Live as well.