Back to Experiences
Print Product Fact Sheet
Rates valid between 24 August 2020 and 30 September 2020.
Starting From R 750 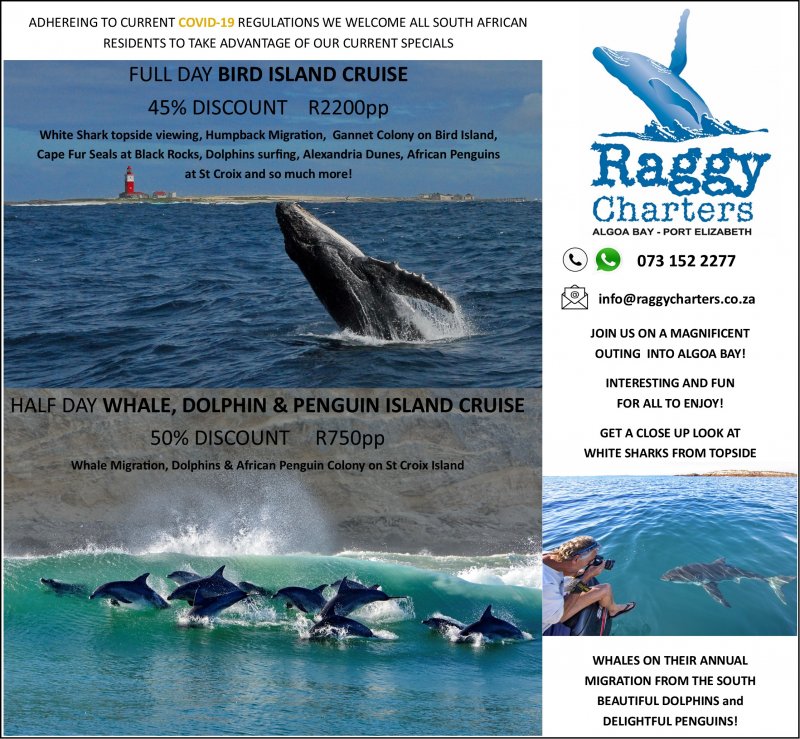 Our Bird Island Cruise is an 8 hour cruise. We meet at 7am at the Nelson Mandela Bay Yacht Club, departing after a short briefing and returning in the early afternoon around 15:00. Bird Island is home to 250,000 Cape Gannets, the largest breeding colony of these birds on the planet. The 19 hectare island is fairly flat which allows our guests close-up views of the Cape gannets and African penguins which nest on the island. The Bird Island group also consists of Stag Island, Seal Island, and Black Rocks. Black Rocks is home to 4,000 playful Cape fur seals and guests also have a good chance of seeing great white sharks as they feed in this area. These islands are nearly 60km away from Port Elizabeth, making it a full-day excursion, so it needs as early a departure as possible. The Bird Island group, along with the St Croix Island group, recently became part of the Addo Elephant National Park, allowing rangers to patrol the islands in aid of conservation efforts to protect the African penguin population. As they are Marine Protect-ed Areas, please note that guests are not allowed to actually go on to the islands. or our Whale, Dolphin & Penguin Island Cruise operates during the morning (weather permitting) from 8am until 12pm (roughly). We take guests to St Croix Island in Algoa Bay, which is home to the largest breeding colony of African penguins in the world. These endangered birds have rapidly declined, as our population alone lost 70% of their numbers in 10 years. It is along this route that we have the best chance of finding all the other exciting marine creatures that frequent our bay. Between June and January we find the âgentle giantsâ humpback and Southern right whales. Both species travel thousands of kilometres to use the safe and warm shores of Africa as their breeding grounds. Humpback whales are well known for their acrobatic breaches and they never fail to amaze here in Algoa Bay as we see thousands of them passing by. Southern right whales prefer the shallower waters and seem to really enjoy getting close up and personal with our guests as they lazily roll and dive around the boat. We are lucky to boast some of the best bottlenose dolphin sightings in the world as 30,000 individuals use our bay every year, and their numbers are only increasing as we constantly see babies amongst the often 400-strong pods.

Unforgettable experience for locals to enjoy

PRICE PER PERSON (Starting From)

This Experience is linked to Raggy Charters