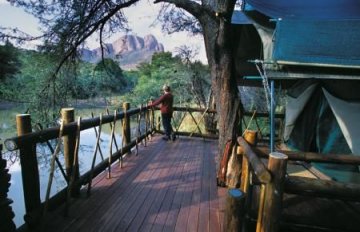 The Marakele National Park in the heart of the Waterberg Mountains, as its Tswana name suggests, has become a âplace of sanctuaryâ for an impressive variety of wildlife due to its location in the transitional zone between the dry western and moister eastern regions of South Africa. Contrasting majestic mountain landscapes, grass-clad hills and deep valleys characterize the park. Rare finds of yellowwood and cedar trees, five metre high cycads and tree ferns, are some of the plant species found here. All the large game species from elephant and rhino to the big cats as well as an amazing variety of birds including whatâs probably the largest colony of endangered Cape vultures (more than 800 breeding pairs) in the world, have settled here.

Areas of Special Interest
A narrow tar road takes visitors up to the top of the Waterberg massif. Views and scenery are spectacular. One is also in the proximity of the vulture colony and these large birds will soar past at close quarters.

5 Things to Seek
Cape Vulture â the park hosts one of the worldâs largest breeding colonies of this endangered species. While birds may be seen in the air catching thermals anywhere in the park, the drive up to the Sentech Towers is nearest to the colony and close encounters with these enormous birds will leave visitors breathless.
African Elephant â while some elephant had been previously reintroduced into the park, it was the release of the Tuli elephants in 1999 that captured the publicâs and mediaâs imagination.
Rhino â Marakele has a high density of both rhino species and most visitors should see these animals, particularly the more gregarious and diurnal white rhinoceros.
Kudu â as browsers these antelope are in their element at Marakele. Look out for the bulls with their magnificent spiral horns.
The not-so-often-seen-elsewhere antelope species such as reedbuck, mountain reedbuck, eland and tsessebe can be found here.
For more information visit www.sanparks.org